Bill English stealthy? Maybe we should take away his megaphone to make his plans more open

The word “stealth” takes on new meaning in the lexicons of the lefties.

Listen to their leader, Andrew Little, for an example of how they use it:

Plans to offload state houses to social housing providers is “an asset sale by stealth,” the Labour Party says.

The deluded Andy is banging on about an expression of interest from an Australian company, Horizon Homes, to buy surplus state housing stock.

He is claiming the Government has given no reason why the houses should be sold offshore,

But having surplus stock and wanting to find a buyer seems reason enough if you are not too fussy about where the buyers live – so long as their money is good (which perhaps rules out the Greeks for now).

END_OF_DOCUMENT_TOKEN_TO_BE_REPLACED

Louisa is on the warpath again, this time for more sex-change funding – but at whose expense?

Ms Wall, for constituents who might have forgotten, is the Labour bint who introduced the legislation that legalised same-sex marriage.

Now she is banging on about the transgender community needing more support than it is getting from the Government.

More particularly, she wants taxpayers to cough up for more transgender folk to get the surgery they crave to turn them from one gender to the other.

She said more than 60 people were on the waiting list for sex reassignment surgeries and action needed to be taken.

“These are people who are wanting access to what is a medical procedure, who can’t in New Zealand because we don’t have the surgeons.”

So it seems Ms Wall’s demands are a bit more complicated than it seemed at first blush.

But second, she wants more surgeons trained in the delicate art of putting nuts where a fanny used to be and vice versa.

END_OF_DOCUMENT_TOKEN_TO_BE_REPLACED

Alf has been keeping an eye on the harpies who have been hounding Sir Tim Hunt, the eminent scientist who has lost his job for being not too clever when he tried to make a joke.

It’s disappointing to find a Kiwi sheila among their ranks.

Yep. Siouxsie Wiles (the lass with a name that seriously stresses Alf’s spell-checker) chimed in to swell the chorus of condemnation of a bloke who is being judged and found wanting not because of any shortcomings in his scientific accomplishments but for a lapse in his social skills.

Or – as she put it – she has tossed in her 2c worth on the “latest sexism in science debacle”.

END_OF_DOCUMENT_TOKEN_TO_BE_REPLACED

These couldn’t be so easily carried on to a plane – not by mistake, anyway.

Alf is disinclined to add his voice to the cries of outrage about a prominent indigenous person who has become embroiled in a row over his relationship with  indigenous birds.

No, stupid. Not wahine.

We are talking here of kereru, or native wood pigeons for any of Alf’s constituents who might be recent immigrants.

The NZ Herald reports here on the matter:

Ngapuhi chairman Sonny Tau has admitted to being caught in possession of dead kereru and says he deeply regrets his mistake.

Mr Tau confirmed that he was questioned on Tuesday by a Department of Conservation officer about the kereru –
also known as native wood pigeon – in his possession.

It’s a rare bird and it is protected.

END_OF_DOCUMENT_TOKEN_TO_BE_REPLACED

Gotta say Alf hopes the book is thrown at the Greenpeace tossers who staged the day-long protest yesterday over what they say is government inaction on climate change.

Even better, let’s throw a library of books at them because this should inflict greater hurt.

The tiresome foursome are believed to have used scaffolding at the rear of Parliament to get onto the building, then make their way to the ledge which overlooks the forecourt.

Alf didn’t pay much attention to their antics, but it seems they placed solar panels there and unfurled a benner with a photo of the Prime Minister, John Key, and the words “cut pollution, create jobs – yeah, nah”.

Not all MPs were too dismayed but according to Radio NZ:

END_OF_DOCUMENT_TOKEN_TO_BE_REPLACED

Go ahead and get rid of the bangers, David – and see what happens when the jailbirds find you 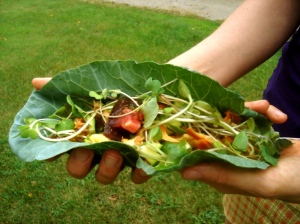 And there’s another treat in store an hour from now…

A goody-two-shoes popped up at a select committee meeting today to bat for more and better prison tucker.

We should be by no means surprised to learn this food fanatic comes from the fevered ranks of the Green Party.

In a select committee this morning, Green Party corrections spokesman David Clendon asked officials whether the budget for feeding prisoners would be raised.

Should Clendon ever become Minister for Corrections – God forbid – this suggests taxpayers would be called on to cough up more generously for our jailbirds’ tucker.

Whether the jailbirds would thank him is open to question because on his watch they likely would be treated to a vegetarian diet packed with muesli, yogurt, nuts and and what-have-you.

This isn’t too far removed from what they get now, according to this sample menu published today in the NZ Herald:

END_OF_DOCUMENT_TOKEN_TO_BE_REPLACED

Some namby-pamby tossers in the capital city want to waste a lot of public money on a chemical solution to the pigeon problem.

Problem, at least, if you don’t much like pigeons.

Alf would prefer them to the drunks and dope fiends who make bits of the Wellington city centre a no-go zone for civilized persons.

Bird crap does not make the same disgusting mess as a vomiting inebriate or junkie.

But there are people who reckon Wellington’s pigeon population is out of control.

And some of them say it’s time to look at contraception or feeding bans.