Nothing here to make up for those bloody fuel taxes

Alf has been eagerly awaiting news from the Beehive to help mollify his Eketahuna North constituents, who remain riled about being stung with higher fuel taxes to make life easier for Aucklanders on the transport front.

No salve was dispensed today.

That’s not to say the Beehive has buggered off to the West Coast for a get-together, as Labour MPs did – to a region that should have been as scarlet red as The People’s Flag, but which fell to the Nats at the last election.

National’s Ministers are beavering away and earning their keep.

Chris Finlayson, Treaty of Waitangi Negotiations Minister, has welcomed news that Te Runanga a Iwi o Ngapuhi is beginning a process to secure a mandate for the settlement of Ngapuhi’s historical claims.

Ngapuhi is the largest iwi in the country, with around 170,000 members. But their home patch is far from Eketahuna.

Environment Minister Nick Smith took time out from finding bits of his ministry to send to the shredder and welcomed the announcement by The Warehouse that it plans to reduce the use of plastic bags by charging customers who use them.

“More than a billion plastic bags are used in New Zealand each year and they add to the excessive waste that ends up in our landfills. I commend The Warehouse for its initiative and for its environmental leadership.

“The small charge will just make people think again as to whether they really need a plastic bag.

“The move is in line with the New Zealand Packaging Accord, which aims to reduce waste, and the Make a Difference Campaign.”

But we don’t have a Warehouse in Eketahuna. Alf’s constituents will be indifferent.

“I’m very happy to say that a total package of $44.6 million has been allocated to fund property upgrades to Upper Hutt College, Heretaunga College, Fergusson Intermediate and Maidstone Intermediate,” Mrs Tolley said. “This package is made up of $14.6 million previously allocated and an additional $30 million.

“None of these four schools received modernisation funding over the five years while the future of the Upper Hutt schools network was being decided.”

But Eketahuna kids – obviously – don’t go to any of those schools.

Phil Heatley, Minister of Fisheries, announced the next stage of Fisheries 2030, a review to establish clear direction and actions necessary to unlock the future economic potential of New Zealand’s fishing sector.

Fisheries 2030 was initiated by the Ministry of Fisheries in August 2008 as an independent review of the fishing sector. The review, carried out by PriceWaterhousecoopers, incorporates input from key leaders from across the fisheries sector including aquaculture, commercial, amateur and customary fishers, as well as environmental and other NGOs.

Mr Heatley said the report contained a useful package of measures to move the debate forward.

“The fundamentals of our fisheries are sound, now is the time to build on them for the future.

The review listed several measures “that could enable better value to be gained from fisheries and could contribute to a strengthening of the economy and New Zealanders’ experiences of fishing,” Heatley said.

But it’s a National announcement, so it must be good for someone.

But hey – the fishing industry in Eketahuna is negligible. Zero, actually, unless you take our takeaways shop into considerations. 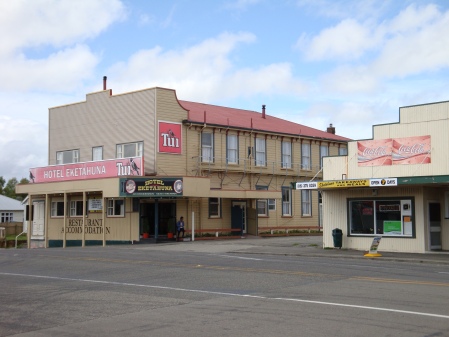 Our takeaways shop (right) - doing its bit for the fishing industry.

This entry was posted on Wednesday, March 18th, 2009 at 5:29 pm and is filed under Education, Environment, Maori affairs. You can follow any responses to this entry through the RSS 2.0 feed. You can leave a response, or trackback from your own site.