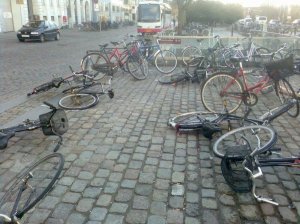 So which one will John Key pick up to get to his dinner engagement?

Alf is far from happy with The Boss this morning.

John Key has gone all the way to Copenhagen for the much-ballyhooed greenhouse gas bunfight, but he won’t be delivering New Zealand’s speech at the international climate negotiations.

Nope. Not because – as Hone Harawira did – he is going to bugger off to Paris for a bit of sight-seeing with the missus.

In John Key’s case, he will be buggering off for a bite rather than deliver the speech.

Officials have confirmed Mr Key, who arrives in Denmark on Thursday morning, will be at dinner at the royal palace while Climate Minister Nick Smith delivers a three-minute speech on Thursday night.

If all this were happening in London, Alf would have no complaint. In that case The Boss would be delegating the job of speech delivery to Nick Smith so he could dine with Her Majesty, Queen Elizabeth II.

As every good New Zealander knows (or should know), we are a
constitutional monarchy and a Commonwealth realm, and Her Majesty – as our reigning monarch – is our de jure head of state.

Her official title is Elizabeth the Second, By the Grace of God, Queen of New Zealand and Her Other Realms and Territories, Head of the Commonwealth, Defender of the Faith.

It would be his duty for Key to turn up at her dinner table for a feed, if invited.

The same does not apply to Danish royals.

For starters, the buggers ride bicycles.

As Alf learned while confirming this awful truth by consulting Wikipedia…

“bicycle monarchy” (or bicycling monarchy) is a British term that refers to the more informal and modest personal styles of the royal families of countries in Scandinavia and the Low Countries, particularly the Netherlands.

The term is often used in a pejorative sense by newspapers in the United Kingdom, reflecting a pride in the pomp and ceremony of the British monarchy.

They probably have pots of money and can afford a chauffeur-driven limo, so what’s the thing about cycling?

The possible reference to the Danish monarchy stems from the Nazi occupation of Denmark during World War II. The non-hostile relationship between the governments of Denmark and Germany prompted accusations of collaboration. In a show of support for the Danish people in the face of such claims, heir apparent Prince Frederick (later Frederick IX) and his wife Ingrid took to taking bicycle rides around Copenhagen.

If The Boss must duck off to dine with Danish royals, however, here’s hoping he at least tries to earn his keep by promoting our plans for a national cycleway. That would go a small way towards putting things right for Alf.

They might consider coming here for the grand opening.

This entry was posted on Monday, December 14th, 2009 at 9:43 am and is filed under Politics. You can follow any responses to this entry through the RSS 2.0 feed. You can leave a response, or trackback from your own site.