Ngai Tahu puts out a tax net and – whee! Then it pulls in some of its eeling competitors’ profits 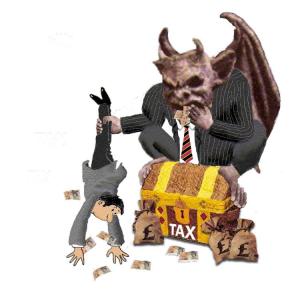 Just look on it as a down payment on environmental protection.

Alf sounds a warning today: bit by bit, New Zealand is in danger of having its economy shifted into the control of iwi.

He sounds this warning on reading of a perturbing precedent being set by an “iwi tax”, or a conservation levy.

It’s for environmental protection, according to
the Dom-Post report at Stuff. Ha!

This (Alf would contend) entitles us to view it as as a protection racket.

This snide thought is reinforced by the discovery that – first up – the levy is being slapped on Ngai Tahu business competitors, presumably to try to ensure they do not remain competitors for too long, and if they do, they will be struggling competitors.

This would ensure the protection of one bit of Ngai Tahu’s business empire as well as the environment.

The competitors in this case are Canterbury eel fishermen.

But the impulse to protect the environment (and iwi profits) won’t be confined to the Canterbury eel fishing industry.

According to Stuff, the levy is expected to create problems for other fishermen seeking to protect their existing property rights from Treaty settlement erosion.

Seven Lake Ellesmere eel fishermen have agreed to pay Ngai Tahu about $29,000 a year – the equivalent of 8 per cent of the lake’s total annual eel fishery earnings of $360,000 – for environmental protection purposes.

Ngai Tahu, which was granted ownership of Lake Ellesmere’s shallow-water bed in its 1998 Waitangi Treaty settlement, decided to impose the levy in March last year.

The seven fishermen, who possess a competing eel fishery, a right allocated under the Fisheries Act 1996, agreed to pay the conservation levy to Ngai Tahu this week.

Ownership rights – we are told – have been eroded in other Treaty settlement deals being done by the Government, such as the Waikato-Tainui Raupatu Claims (Waikato River) Settlement Act legislation.

“When the Crown returns lakes, rivers or tributaries to iwi as part of the settlement process they are often not doing it in a manner which protects the rights of the existing commercial fishermen, including Maori fishermen. They are doing it in a way which creates a new injustice to resolve an earlier injustice,” Mr Scott said.

The recent Waikato legislation was an example. “This legislation made it clear the current crop of commercial eel fishermen should have the right to continue fishing.”

But it had removed their rights to on-sell their fishing quota rights.

“They’ll have to talk with the iwi who will decide whether they will allow particular fishermen to continue fishing and how much they will charge people to [do so].”

Alf has enormous sympathy for the concerns of this Scott bloke, who said the Crown should not have entered into settlements that failed to protect the rights of existing fishing operators.

Stuff has gone to the office of Treaty Negotiations Minister Chris Finlayson, but didn’t make contact with a Minister who is sounding increasingly mealy-mouthed in Alf’s humble judgement of these matters.

Instead they were given their statement by a spokesman, well trained in the craft of making statements that sound as mealy-mouthed as they would be if they came direct from the Minister.

The spokesman said the Government respected property rights and the protection of third-party rights was an important principle in Treaty settlements.

So how is it going to protect the interests of the fishing folk mentioned in the Stuff story?

Or, as Alf suspects, has the bloody horse bolted?

We have heard a rising groundswell of iwi leaders rubbing their hands in anticipation of securing customary rights to great slabs of our coastline.

Then, we should anticipate, they will exercise their right of veto on non-Maori enterprises which – we can expect – might be lifted, but only in return for giving them heaps of money.

Oh, and don’t forget the buggers up there in Ngaphui country who are laying claim to sovereignty.

These people harbour the provocative idea that Ngaphui only gave away the right for Europeans to govern themselves.

Governing themselves means having a tax system.

And Northland Maori are pushing for a special economic development tax as part of their Treaty settlement.

Ngapuhi want to impose a 9% “tribal tax” on everyone who lives in the region, to be administered by Inland Revenue.

He says the tax would help restore fiscal equity in Northland.

Restore fiscal equity? What on earth is that supposed to mean?

The consequence of achieving this fiscal equity thing through a tax is not so puzzling.

Businesses will bugger off from Northland to set up shop somewhere else, preferably away from the foreshore where the are bound to be snared by whatever economic frustrations come with the exercise of customary rights.

This entry was posted on Friday, June 25th, 2010 at 9:25 am and is filed under Economy. You can follow any responses to this entry through the RSS 2.0 feed. You can leave a response, or trackback from your own site.