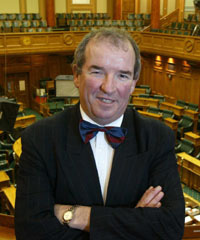 The bugger whose neglect of Alf was catalystic in the establishment of this blog has been in a bit of strife with the law.

Yep. Alf is talking about Barry Soper, who scrubs up well on a good day as can be seen by this pic of him.

Mind you, Soper wears bow ties on many occasions other than black tie ones, which makes him look like a bit of tosser, which he probably is. Moreover he was bearded, last time Alf saw him, and beards can be camouflage for a myriad of flaws.

But Alf digresses from the day’s news:

Newstalk ZB political editor and veteran broadcast journalist Barry Soper has been fined and disqualified from driving after being arrested for drink-driving last month.

Soper appeared in Porirua District Court on Friday, pleading guilty to driving in central Wellington with 99 milligrams of alcohol for every 100ml of blood – the legal limit is 80.

Normally you would expect Soper to be delighted to win himself a bit of publicity. He likes to be admired, a trait he shares with Alf.

But something resulted in his case being heard somewhere other than Wellington, where the court reporters would have made a meal of his conviction.

The magnitude of the fine is now known and Soper has gone curiously quiet.

It is unclear why Soper was allowed to appear in Porirua, when the offence would usually have been heard in Wellington. He was disqualified for six months and fined, but court staff were unable to say how much he was fined. Soper did not return calls from the Sunday Star-Times.

Newstalk ZB general manager Dallas Gurney said he was aware of the conviction and he “counselled” Soper on the matter.

“We’ve spoken about it and Barry has acknowledged that drink-driving is an issue in New Zealand and he’s made a mistake. The only other thing I would say is that he’s stepped up and taken responsibility for the matter.”

Some of Alf’s constituents – at a healthy distance from the Parliamentary press gallery in Eketahuna – might wonder who gives a toss about a political hack being done for drink driving, except maybe the hack’s missus and five kids and one or two others. including his boss.

Mrs Grumble tracked down this brief biography on the Celebrity Speakers website.

Barry Soper has been a journalist since the 1970’s with the last two decades spent in the Parliamentary Press Gallery. He is the longest serving member of the gallery and the country’s most experienced political broadcast journalist…

Mrs Grumble knows you shouldn’t believe everything you read on a website about celebrities, of course, and she dug up this item from Newswire.

Ian Templeton has spent more than 60 years as a journalist, 53 of those from Parliament’s press gallery. His services to journalism led to the award of Companion of the New Zealand Order of Merit in this year’s New Year honours.

Templeton is still a member of the press gallery.

According to Alf’s maths, he therfore has a mujch stronger claim to being the longest-serving member of the press gallery. Someone should put the record straight on the Celebrity Speakers website.

Oh, let’s note that Cactus Kate has spotted the item about Soper and reckons the more interesting bit of the story is that he remained silent.

She has sympathy for him.

Oh please….Soper is a political reporter, not a rolemodel for thousands of young children making a living out of a reputation for health and clean-living. Why on earth would he have to acknowledge that drink-driving is an issue in New Zealand, like he’s some sort of law-maker?

At 99mgs he was barely over the limit anyway and at his age can probably drive better at that reading than a younger person stone cold sober. The drink-driving wowsers are out again. More people are killed by bad driving than drunk-drivers.

Alf would grudgingly concede that this is a fair judgement.

His problem is not that Soper enjoys a libation of the waters of true joy – it’s that he declined Alf’s invitation to buy him a beer and that he dumps Alf’s media statements in the waste paper basket.

This entry was posted on Sunday, July 25th, 2010 at 10:34 am and is filed under Media. You can follow any responses to this entry through the RSS 2.0 feed. You can leave a response, or trackback from your own site.