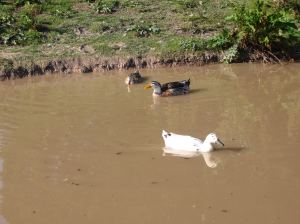 Ducks crap in it and fish fornicate in it.

Alf is delighted that a Ministry of Health survey upholds the prudence of his practice of drinking nothing that has not been (a) boiled or (b) bottled as booze.

His liquid intake essentially comes from lots of coffee and plenty of good liquor.

He has aired the health benefits of booze in a previous post.

Today he is pleased to pass on the gist of a report which gives umpteen good reasons for steering clear of water as a thirst quencher.

We just don’t know where it has been.

And so – according to a Ministry of Health survey – one in five New Zealanders has unsafe or unregistered drinking water.

Matters are not improving,

In its account of the report, Stuff says the July 2008-June 2009 review of drinking water quality shows water supplies are deteriorating.

About 849,000 people, or 20 per cent of Kiwis, were supplied with water that either failed to meet bacteriological standards or had not been classified because sources were unregistered.

However, 247,000 people received water that did not comply bacteriologically with standards because sampling was too infrequent to show compliance.

Because he sticks diligently to his practice of avoiding liquids that have not been boiled or bottled, Alf was not among the victims of 33 outbreaks of water-borne illnesses, more than double the previous period.

On the other hand, it seems reasonable to observe that 37 is bugger all, considering the thousands of people who are drinking this mucky stuff.

Inevitably, any new report on water quality – if it has the potential to embarrass our great government – flushes out another statement from Labour’s Brendon Burns.

Sure enough, he seized on the survey findings to take a poke at the splendid Tony Ryall.

“Mr Ryall said the review was expected to be completed early this year. Well, it’s now late-October, and hard-pressed small communities, some with water quality not fit to drink, are still not able to get access to the funding Labour provided.

“Every day that goes by Mr Ryall is increasing the risk of a major outbreak of water-borne illness in New Zealand,” Brendon Burns said. ”It will be on his hands and his conscience if such an outbreak occurs.

“Little wonder the Ministry of Health has buried the latest review of drinking water quality which shows a 3 percent decline (to 80 percent) in the number of New Zealanders drinking water safe from bacteriological contamination (E-coli).”

Must check out where this Burns bugger sits on booze legislation.

He sounds like the sort of fulminating and flatulent old fart who wants to make it harder to get access to good liquor rather than easier.

This entry was posted on Wednesday, October 27th, 2010 at 10:32 am and is filed under Health. You can follow any responses to this entry through the RSS 2.0 feed. You can leave a response, or trackback from your own site.