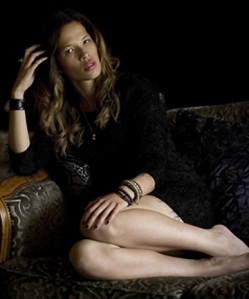 In Kawerau, ladies, you are regarded as an ugly kid even if you grow up looking like this...

Alf wonders if it has something to do with the world view of people who live in Kawerau.

They see ugliness where others see something very different.

Whatever it might be, New Zealand’s Next Top Model winner, Danielle Hayes, today tells how she was bashed by bullies and branded “ugly” in her home town.

Alf’s world view was shaped in Eketahuna and he sees things differently.

The TV show’s judges presumably see things Alf’s way, too, because they have described Hayes as “the face of the future”.

But the 19-year-old admitted to Sunday News she had to overcome hang-ups from years of childhood bullying in Bay of Plenty’s Kawerau before making it to the top.

“I used to get punched a lot by the other Maori kids.

“It was constant name-calling, like, `You’re ugly, you’re never going to do anything in your entire life’,” she said.

Hayes has told Sunday News that if she ran into her bullies now she would merely give them the finger and not say anything to them.

“I’ve proven them wrong just being on the show and winning the competition.

“They probably didn’t know what beauty was back then.

Alf is not so sure about that second proposition.

He wonders whether people with tattooed faces, who can stick out their tongues, roll their eyes and look menacing, might be regarded as handsome – beautiful, even – in the Kawerau world view.

Kawerau, of course, is one of the country’s less attractive towns, although Kawerau people will tell you it’s a great place, which only goes to show that they shouldn’t be relied on too much when it comes to distinguishing between attractive and ugly.

Kawerau is a Beautiful Town in the center of the Eastern Bay of Plenty. It has excellent housing to take advantage of and many recreational activities for your spare time.

Having said that, the claims made on behalf of the town are not sufficiently alluring to prompt Alf to move there.

Kawerau has one of the WARMEST average temperature in New Zealand.

Kawerau has the BEST DRINKING WATER in New Zealand.

Kawerau has some of the BEST VALUE quality homes in New Zealand.

Kawerau has the only FREE HEATED PUBLIC SWIMMING POOL in New Zealand.

Dunno how they worked out the town has the country’s best drinking water. Who did the judging, and on what criteria?

The district council website has good things to say, too.

Kawerau is renowned for its friendliness, great sense of community, wonderful climate and its strong Maori Heritage and has the distinction of being one of the youngest towns in New Zealand.

But Danielle was bullied.

And she paints a different picture of life in Kawerau and the way ambitions are shaped there.

On the first episode of the TV show she said her biggest achievement was not being pregnant or in jail.

She told Sunday News she did not walk that path because of her strength of character.

This might have something to do with the water, of course.

And if that’s what it does, clean or not, Alf will be staying put in Eketahuna.

This entry was posted on Sunday, November 7th, 2010 at 10:46 am and is filed under Uncategorized. You can follow any responses to this entry through the RSS 2.0 feed. You can leave a response, or trackback from your own site.