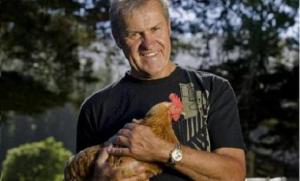 Sorry, my feathered friend, but we've been outmanoeuvred on the shechita issue.

Alf was surprised to learn that the Jewish community in New Zealand is celebrating the overturn of the country’s ban on kosher poultry.

He likes to think he and David Carter, our splendid Minister of Agriculture, are great mates.

Nor (Alf suspects) was it reported by our news media until today, although Jewish organsaround the world were braying two days about this victory for the campaigners who fought against the ban.

Readers of thejc.com were told of it on Friday.

An agreement has been reached with the minister of agriculture which will enable the shechitah of poultry to continue, but the community is still negotiating over the slaughter of lamb .

…has won an 11th-hour agreement from the government to allow the kosher slaughter of poultry.

Lawyers acting for the community were due to begin a legal battle Monday against the government’s controversial ban on shechita in the High Court in Wellington.

The code requires all commercially slaughtered animals to be stunned before slaughter, making shechita illegal.

A statement issued by the heads of the community on Friday afternoon stated: “Until those negotiations are concluded, or the matter is determined in court, the interim orders which were previously granted enabling the shechita of lamb will continue.”

Back in May, Carter rejected a recommendation that shechita be exempt from the new animal welfare code.

The Jewish community filed legal action against the ban in August.

Proceedings were due to start in the High Court in Wellington on Monday but have been adjourned.

The New Zealand community will now continue negotiations in relation to lamb and, until those negotiations are concluded, the interim orders, which were previously granted enabling the shechitah of lamb, will continue.

Alf had posted on the subject back in May at the time the shechita hit the fan.

One consequence of their discussions is a new government edict: all animals that are slaughtered must first be stunned under a new animal welfare code that took effect on Friday.

A second consequence is that crayfish henceforth will go to a better death (although Alf is not sure how we know this). The new rules extend to the slaughter of crustaceans, so the practice of dropping live crayfish in boiling water will no longer be permitted.

A third consequence is that some Jews are (or will be) pissed off about the banning of kosher slaughter, or shechita.

Shechita is banned in Iceland, Norway and Sweden, too.

The Herald on Sunday today has drawn Alf’s attention to Carter’s backdown and other developments.

It goes further than the Jewish media by suggesting Carter had a conflict of interest in the matter (something to do with shares he holds in meat-exporting companeis) and because he took trade considerations into account.

Documents obtained by the Herald on Sunday appear to show Carter broke the rules governing his portfolio by considering trade implications when making the original decision.

An allegation of conflict of interest has been made because of that – he holds shares in a company which exports meat and met with senior managers who wanted a ban on shechita to protect their interests.

Carter was pulled back into line after lawyers told him he was allowed to consider only animal welfare issues. He had been advised trade with Muslim countries might suffer if it emerged kosher meat was allowed to be produced here while restrictions were placed on halal slaughter.

Before the backdown, a bloke called David Zwartz, who is chairman of the Wellington Regional Jewish Council, chimed in on the subject with an op-ed article saying ritual slaughter is about rights for humans as well as animals.

In taking legal action, the Jewish community is not just protecting its own “right to manifest [Jewish] religion or belief in worship, observance, practice, or teaching, either individually or in community with others, and either in public or in private” as section 15 of the Bill of Rights Act states.

It is asserting the right of any minority ethnic or religious group to carry out its religion without interference from the state, as can be expected in a free and democratic society.

Alf wonders how far we should go with this line of reasoning in defence of cultural and religious rights.

It so happens an international lobby group is demanding that the United Nations officially outlaws female circumcision worldwide.

In a move that spells hope for thousands of young Kenyan girls subjected to female genital mutilation (FGM) every year, the leaders want the matter discussed at a UN General Assembly and the ban announced.

The group from 42 countries has kicked off the campaign with an official appeal which was carried in last Monday’s edition of the International Herald Tribune newspaper, calling upon the UN General Assembly to adopt a resolution to ban FGM worldwide.

Alf wriggles uncomfortably at the thought of male circumcision, for what it’s worth, and regards it as cruel.

But female circumcision is downright barbaric and should be outlawed.

Following Zwartz’s line of argument, the critics should back off and the barbarism should continue.

To which Alf says “bollocks”.

This entry was posted on Sunday, November 28th, 2010 at 10:52 am and is filed under Uncategorized. You can follow any responses to this entry through the RSS 2.0 feed. You can leave a response, or trackback from your own site.