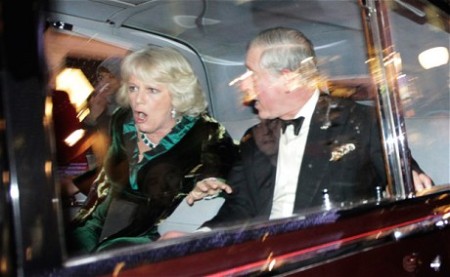 "I think we should take a cab and a different route next time." 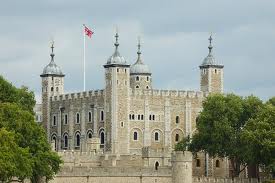 There's plenty of room in here for the bloody rioters.

He and his wife Camilla will not be scaling back their public engagements or abandoning walkabouts.

The Rolls-Royce carrying them were attacked during violent protests against higher university fees.

Every member of that baying mob – of course – should be rounded up and flung into the Tower of London, which would swiftly and simply take care of their fees complaints. Their study days will be over.

What the rabble did surely amounts to high treason.

It certainly would have been high treason in the good old days before the democracy caper gained too much currency.

The rabble broke a window of the Rolls and spattered it with paint as the royal couple drove to a theatre in London for a bit of entertainment.

Defiling a majestic vehicle like a Rolls should be an offence worth a long time in The Tower for starters.

According to The Sunday Telegraph, the prince and duchess found the assault on their car intimidating.

But they are determined not to be cowed.

A royal aide said both the Prince and the Duchess would remain as “visible” as ever during public engagements.

“Their default position is to get out there and get on with the job. It is absolutely business as usual.

“The Prince will leave it up to the security people to make sure that they are secure and the public are secure wherever they go, but they will crack on,” the aide said.

At least some good things have emerged from what must have been a ghastly experience for the King in Waiting and the duchess.

Police leaders are calling on the Government to consider making water cannon available for future protests.

That’s the ticket. A good blast from one of those would have dampened the spirits of the London upstarts.

One senior source at the Police Federation said the rioting in central London would have come to a much earlier conclusion if protesters had been given a “good soaking”.

Julie Spence, a former chief constable, agreed that the use of water cannon should be part of any public order review.

Paul Davies, who heads the Police Federation’s operational policing committee, said the measure “would certainly be controversial but it comes back to protecting members of the public and allowing police officers to do their jobs”.

Oh, and Alf is delighted to learn that officers have issued photographs of 14 individuals from last Thursday’s protests, some of whom were wanted in connection with the attack on the royal convoy in Regent Street.

Royal sources are reported as saying the couple maintained full confidence in the ability of the police to bring those responsible for the attack to justice.

But Alf would dispense with the justice thing in this case and – dammit, why not? – bang the buggers up in the Tower of London for the next 30 years. Maybe more.

As for the adequacy of the security around the royal couple, Alf notes that the royal sources

… insisted that the couple remained “extremely supportive” of their police protection officers, and blamed the incident on the rioters, and not the police.

The Prince is said to be awaiting the results of an inquiry by Scotland Yard before making any further decisions about his security.

But questions are being raised about why the royal couple were driven to the Royal Variety Performance in a conspicuous, 20ft-long limousine.

There’s talk of a more manoeuvrable, more secure car being used in such circumstances in future.

When a prince and his missus are reduced to giving up their Rolls, it is all too plain the commoners and hoi-polloi increasingly are making Britain a country best avoided.

This entry was posted on Sunday, December 12th, 2010 at 11:01 am and is filed under Royalty. You can follow any responses to this entry through the RSS 2.0 feed. You can leave a response, or trackback from your own site.