Packing our oldies off to Niue is an attractive idea, but maybe it could be turned into a penal colony 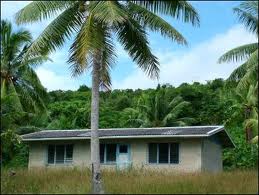 Sending our oldies here is one idea...sending Black Power here is another.

Alf is a great mate of neighbouring MP John Hayes, down in the Wairarapa, a splendid fellow in most respects although opting to have stomach-stapling surgery seems a somewhat extreme way of losing a bit of weight.

Anyway, he is a former diplomat who chairs Parliament’s foreign affairs committee.

And this committee has come up with a great idea – it reckons we should be shipping elderly retirees off to the warmth of Niue to give the economically broke nation an industry and to save millions of dollars of aid wasted on the remote Pacific island.

The idea is aired at Stuff, which says the report was four years in the writing.

The report also says New Zealand has spent more than $300 million over 30 years on the 1200 Niueans for “almost no return”.

This, of course, strikes Alf as being a bloody outrage in these times when we are fussing about Budget deficits and fiscal deficits and all that carry-on, and are looking for spending cuts.

But Niue’s Premier Toki Talagi seems to have reacted angrily, accusing the committee of being paternalistic.

He forgets that air travel doesn’t come cheap and a phone call is all that’s needed to sort these things out, surely.

But not only is the bugger being unduly tetchy about not being consulted.

He’s being hostile to the committee’s thinking too.

Niue would not allow the country to be turned into a retirement home, other than for its own people to return home, he said. “They can live in some of the empty houses.”

But Alf has great respect for Hayes and his committee, and he can see that packing off the oldies to that part of the Pacific has its merits, especially if the oldies who are packed off to Niue include the likes of Jim Anderton, Bob Jones and a few others on a list now being compiled.

“The best that can be hoped for is that New Zealand assistance will help the Niue private sector to grow to as large as possible: attracting a retirement village operator might be a good place to start.

“The climate is excellent, existing buildings could be brought into service, and health facilities are satisfactory. Retirees would bring steady cash flow and contribute to stable employment.”

Shipping our oldies to Niue is not necessarily the best way of taking care of the island’s economic problems.

Age need not be the only consideration.

Alf fancies shipping off various political undesirables, starting with the Green Party and the Labour Party.

Alternatively, we could do what the Poms did once upon a time and resurrect the sentence of “transportation” to take the pressure off our prisons.

This means turning Niue into a penal colony.

Alf is prepared to be ethnically sensitive about this and transport only those ratbags who happen to have some sort of Polynesian whakapapa , into which category should come all members of Black Power and a significant number of the buggers now banged up in our jails.

But maybe Niue is much too pleasant to be used for this purpose, and turning it into a penal colony for Polynesian miscreants might encourage some people to turn to crime just to be transported.

Hence Alf remains open to the idea that our oldies could be shipped off into retirement there.

As he understands it, their national super should go much further than it does in this country, which means we could consider cutting it.

Spending on the Winston Peters “free travel” card would go further too.

But Alf personally does not fancy retiring to Niue, which is described at Stuff as a rocky, 259sqkm single island 2500 kilometres northeast of Auckland.

He favours a voluntary system, but with financial disincentives to make staying in New Zealand much less attractive than Niue for superannuitants.

Some exemptions would be necessary.

This entry was posted on Wednesday, December 15th, 2010 at 9:27 am and is filed under Uncategorized. You can follow any responses to this entry through the RSS 2.0 feed. You can leave a response, or trackback from your own site.

One Response to Packing our oldies off to Niue is an attractive idea, but maybe it could be turned into a penal colony