McCully should think about a ban on Aussies, during the Rugby World Cup, if he wants good behaviour 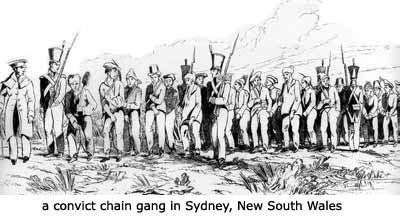 The descendants of this mob should be kept out during the Rugby World Cup.

Dunno if Alf dreamt it, but he thought he heard a Radio NZ National news item about Murray McCully and the Rugby World Cup. But he couldn’t find a record of it on the web when he looked.

McCully – of course – is Minister for the Rugby World Cup, the job which Alf believes he should have been given.

If Alf heard the item correctly, McCully is urging New Zealanders to be on their best behaviour to impress the hordes of overseas visitors who will come here for the rugby, the beer and what-have-you.

Here’s hoping they get the message in Kaikoura, because it seems the folks down there – or some of them – have been behaving very badly in recent times.

Some of the women, you will be dismayed to learn, are far from lady-like and are apt to bring their choppers to bear on their victims, more like sharks than the whales for which the town is world-renowned.

Alf has this on the good authority of Stuff, which reports –

A woman was bitten on the face by another woman while her brother had his jaw smashed and arm broken in the second beating on Kaikoura streets in six weeks, a victim’s partner says.

The man’s partner, speaking yesterday from his bedside at Christchurch Hospital, said not enough was being done to stop random violence in the seaside town.

“Is it going to take someone to die before something is done?”

Six weeks ago, five Christchurch holidaymakers were attacked by a large group of strangers in Kaikoura.

According to Stuff’s account of the latest incident, a Kaikoura bloke needed surgery for serious injuries after being attacked while walking home with his sister and four friends, all from Kaiapoi, after a Boxing Day drink.

If the buggers just had one drink Alf is inclined to show them a tad less sympathy than he would show if they had sunk several drinks. This is the festive season after all, dammit.

But what happened to them was nasty.

His sister was bitten on the face by a woman, and her family thought “a dog had been at her”.

The attack, shortly after midnight, had been “a random, violent ambush” by at least two carloads of people, the man’s partner said.

“There were at least 15 of them, and they all started bashing them.

“Everyone got split up because it was dark and they were trying to run away … one of our friends got his clothes ripped off him, and his phone and wallet stolen.”

Sergeant Barry Hansen, from the local cops, said only seven people were involved in Monday morning’s incident in Kaikoura, although it should be noted that only six were charged.

None was associated with those allegedly involved in the November assault, Hansen said.

“We’re aware of who they are, and as far as I know they don’t associate with each other.”

While “it doesn’t look good”, he said Kaikoura was no different to any other New Zealand town.

“The town is full and there are no other problems.”

But Kaikoura is very different from Eketahuna, where the citizens are very well behaved.

Oh, for what it’s worth, Alf notes that six people have appeared in the Blenheim District Court. Three of them had Maori names and one was an Aussie.

The three with Maori names (perhaps some of the others are Maori, too, but with Pakeha-sounding names) are “special” citizens, of course, by virtue of the indigenous people thing we signed at the UN earlier this year. They are bound to have been led astray by the Aussie, who probably comes from convict stock.

Maybe McCully should consider barring Aussies from coming here for the Rugby World Cup, if he wants good behaviour.

This would (a) ensure that our special people are not led astray by people from across the Tasman whose forebears were convicts and (b) would seriously enhance the All Blacks” propsects of winning the cup.

This entry was posted on Wednesday, December 29th, 2010 at 9:50 am and is filed under Law and order. You can follow any responses to this entry through the RSS 2.0 feed. You can leave a response, or trackback from your own site.