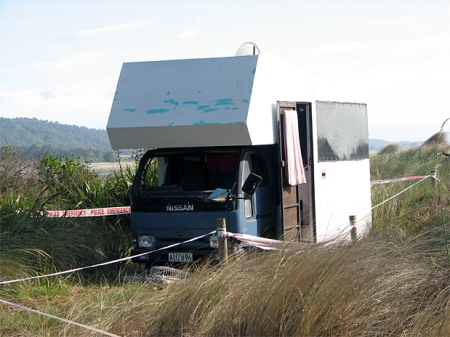 Labour's response to a violent attack on this campervan? It wants more education of campers.

So some bugger from Christchurch – no surprises there – has been arrested for allegedly trying to set fire to a campervan with two people in it.

Alf is obliged to use words like alleged because this bloke has been charged with attempted murder.

According to the cops, they were called to a Tasman District Council reserve at Tamatea Point in Pakawau, between Collingwood and Farewell Spit, about 5.50am after a couple said someone had shot at, smashed and attempted to set fire to their campervan.

If the couple have given a correct account of what happened, then the someone who did the shooting, smashing and attempted burning has behaved in a very anti-social way.

So what would the Labour Party do?

Oh, yes. It would make campers clean up their act.

Labour Party tourism spokesman Kelvin Davis is wanting (a) the Government do do something; (b) tourists to be educated on the do’s and don’ts of freedom camping; and (c) New Zealanders to be educated about how to care for tourists.

Alf has the strong impression that the state has done – and is doing – all that needs to be done and doing in the Golden Bay case.

Members of the Nelson armed offenders squad found the alleged attacker at a nearby house.

The accused had apparently arrived at Pakawau on Thursday evening for a holiday and was staying in a nearby bach.

The man was granted interim name suppression and remanded in custody to appear in the Nelson District Court on January 21.

There. The bugger has been rounded up, banged up and charged with attempted murder.

But that’s not good enough for headline-seeking tossers like Davis.

He wants to blame the Government for not doing enough.

You can check out the mealy-mouthed contents of his silly media statement at Voxy.

You will find he is calling on John Key, as Minister of Tourism to intervene “in what is becoming a blot on the New Zealand’s tourism landscape.”

He said he was responding to news that more freedom campers have been attacked and their camping van set on fire.

“The latest attack highlights a number of problems the Minister needs to address,” Kelvin Davis said.

“First the hostility a few New Zealanders are showing tourists is an indication that some Kiwis haven’t grasped the importance of the tourism industry to our economy.

“Secondly the safety of freedom campers here for the Rugby World Cup cannot be guaranteed.

“People considering coming to New Zealand for the World Cup will potentially be put off by reports of crimes being committed against tourists.

“Thirdly this attack on Kiwi freedom campers is a disincentive for kiwis to travel within New Zealand and damages our domestic tourism industry.”

The PM accordingly should be working closely with local councils and tourism organisations “to work on a plan to solve issues around freedom camping without damaging our tourism reputation.”

Kelvin Davis said educating tourists at point of hire as to the do’s and don’t s of freedom camping as well as educating kiwis about how to care for visitors is imperative to reduce the increasing numbers of assaults on freedom campers.

Alf could find nothing in the statement to show that Davis cares a fat rat’s arse about whether or not the assailant in the Golden Bay case should be locked away for zillions of years for being a thug.

But he does learn from the previously cited Stuff report that calls to clean up freedom camping have been renewed after the attack on the couple in Golden Bay, apparently motivated by the assailant’s anger at their stay at a beach reserve.

The victims are described as a 46-year-old New Zealand man and his 24-year-old Chinese partner, who has New Zealand residency.

Their camping experience turned out to be damned disagreeable.
Terrifying, actually.

The man, who did not want to be named, said their homebuilt campervan was attacked at dawn yesterday.

“He ran over and started smashing on our windows and telling us to move.

“Within a couple of seconds it sounded like he had blown in our front window.”

The man allegedly smashed the campervan’s lights, attacked the toughened-glass windows, punched a large hole in the passenger door and tried to set fire to the cab using methylated spirits and turpentine.

The male camper put out the fire with an extinguisher.

He and his partner, who came to the South Island for Christmas on a limited budget, were terrified and said they would not go camping again.

As it happens, your hard-working National-led Government is on the case, when it comes to dealing with so-called freedom camping, although Alf is a tad disquieted at what is looming as yet another assault on our precious freedoms.

Yes, he knows that freedom camping has become a problem in tourist hot spots with locals angered by campers leaving human waste and litter behind.

But he would like to think we red-blooded Kiwis should be allowed to camp where we bloody well want to camp.

Not for much longer, by the sounds of it, and soon we will have to mind our pees and poos when we pitch our tent or park our caravan at an attractive site.

And Westland District Mayor Maureen Pugh, who is part of a national freedom camping forum, is talking of the need for a bylaw permitting councils to issue instant fines in time for the Rugby World Cup.

It seems a Ministry of Environment-drafted bylaw is due for completion by the end of this month.

And according to Pugh, there have been discussion about fines of $400.

Fines for what, exactly, is not revealed. Peeing in the bush, perhaps.

The price-tag attached to the bloody Rugby World Cup is fast becoming prohibitive.

This entry was posted on Saturday, January 8th, 2011 at 9:25 am and is filed under Tourism. You can follow any responses to this entry through the RSS 2.0 feed. You can leave a response, or trackback from your own site.