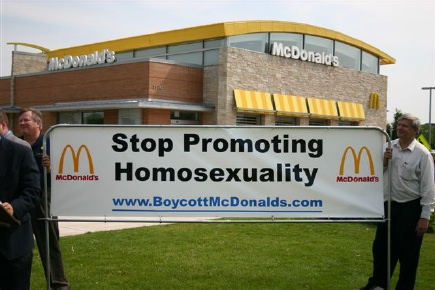 Alf is appalled by the gall of some people (poofters and lesbians, in this case).

They are able to take advantage of a free service, but complain they have been short-changed.

These contemptible ingrates – when they go to McDonald’s restaurants for a burger and fries or some of that good-health tucker now available – can tap into the internet if they want. For free.

But are the poofters pleased?

Nah. The buggers are dismayed to find they can’t tap into so-called “gay” websites.

So they are publicly denouncing the restaurant for the shortcomings in a service that is provided for free.

The Herald tells the story –

The fast-food chain offers customers free WiFi access in 132 of its outlets nationwide.

The service has come under fire after members of the gay community complained that some restaurants – including one in Wellington – could not access various websites, including gaynz.com, because McDonald’s had them blocked.

Other blocked websites include familyplanning.org.nz, nzdating.com and rainbowyouth.org.nz, the site for an organisation for young gays.

The Herald says members of the homosexual community “have slammed the firm’s policies, calling them discriminatory”.

A forum has been set up on the gaynz.com website, where dozens of people have already vented their anger.

Another blogger said: “I don’t support McD’s censorship even if I understand their commercial wish to fit a family-friendly profile.”

But there is a damned good reason for a family restaurant doctoring its systems so the kids can’t plug into certain sites.

Moderators of the website have posted their views, saying the aim is to ensure nothing inappropriate is put up.

They would appreciate that if kids could go to a McDonald’s restaurant, then sit down and visit all sorts of inappropriate web-sites for free, the chain really would – and should – come under fire.

It’s disappointing therefore to hear that the poofter protesters have persuaded the chain to say it would review the blocked sites on “a case by case” basis.

However, it did maintain that the sole purpose of blocking such sites was to uphold the restaurant’s image of it being a family restaurant chain.

A spokesman for McDonald’s told 3 News: “We’re a family restaurant chain and as a part of offering this new service, our policy is that viewed content must be of a family-friendly nature – suitable for a child to view.”

Family First director Bob McCoskrie gets the big thumbs up from Alf for applauding McDonald’s actions and encouraging the restaurant to continue blocking such sites.

Mr McCoskrie said the issue was not about a certain group being discriminated against.

“It is about the content and material which is adult-rated [and therefore] should be blocked in a public setting like McDonald’s … and McDonald’s are to be congratulated for putting families first.

“Some of the websites which they have blocked have been blocked for a good reason.

“People desperate to access this material will have to do it in a private setting through their own [internet] server.”

But the critical element of this brouhaha is that when you are providing something for free, you should be perfectly entitled to ration what you are giving away – or set limits on what is freely accessible on the web, and what is not.

Alf hopes the McDonald’s people don’t buckle. They are on sound ground.

Moreover, they will be anxious not to invite a repetition of the protests in front of a McDonald’s restaurant in Citrus Heights, California, back in 2008.

The protesters on that occasion were voicing their opposition to McDonald’s explicit advocacy of the homosexual lifestyle.

The protest was brought to a close when store officials heeded the wishes of the protesters in agreeing to convey their concerns to the corporate office.

The protest followed McDonald’s rebuttal against pro-family activists who had urged concerned citizens to boycott McDonald’s because of its membership of the National Gay and Lesbian Chamber of Commerce (NGLCC).

The American Family Association (AFA) initiated the boycott, which began on July 3rd. With over 2.2 million members, the AFA’s main motivation is to ensure that money flowing into the over 31, 000 McDonald’s restaurants world-wide from family households is not funneled into anti-family initiatives.

“This boycott is not about hiring homosexuals, or homosexuals eating at McDonald’s, or how homosexual employees are treated,” states the AFA.

“It is about McDonald’s, as a corporation, choosing to put the full weight of their corporation behind promoting the homosexual agenda, including homosexual marriage.”

And how did it do that?

WorldNetDaily explained that the company had given $20,000 to the National Gay and Lesbian Chamber of Commerce and placed one of its executives on that group’s board.

The NGLCC, among other things, lobbies for same-sex “marriage” provisions.

So McDonald’s finds itself now between the proverbial rock and a hard place.

If it surrenders to the poofters in this country, it risks reigniting calls for a boycott of its outlets in the US.

This entry was posted on Tuesday, January 11th, 2011 at 9:27 am and is filed under Lifestyle. You can follow any responses to this entry through the RSS 2.0 feed. You can leave a response, or trackback from your own site.