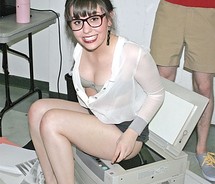 If she must photocopy her bum, she should sign out first (and pay for the power and materials consumed).

Alf will be approaching our Minister of State Services, the admirable Tony Ryall, to suggest he contact the Carlisle City Council where he is bound to pick up a few bloody good tips that will improve public-service productivity.

Applying the advice and getting a better deal for taxpayers won’t be popular, mind you.

The council is copping a bit of flak from whinging staff over some of its rules, but dammit, public money is at stake.

And so – for example – it has ordered employees to clock out if they want to talk about the weather, holidays or babies.

According to an account of these rules in The Telegraph, the
council accuses its employees of treating the office like a “holiday camp”.

Alf fears that’s exactly what happens in Wellington, and no doubt in other cities, where the bloody bureaucrats take taxpayers for a ride.

There are thousands of the buggers.

The latest figures, published back in September, showed the number of full-time equivalent staff positions in the core government administration at 30 June 2010 was 36,771.

This was a mere 2,100 fewer than when the cap was imposed soon after the 2008 election.

If we are not going to get rid of more of them in a hurry, we can at least do something to ensure they are not paid for slacking.

Employees have been criticised for spending too long chatting, gossiping, or going on social networking sites, and not enough time working.

They have been told that to improve efficiency “the working ethos within the office has to change” because “in the current economic climate” they were costing the council too much money in lost time.

And yep, sure enough, a bloody trade union functionary is taking umbrage at the demand that staff actually earn their keep.

Ged Craig, the GMB Union representative, said the message was a “disgrace”.

He added: “It’s ridiculous and a disgrace – it is suggesting that if, for example, you are standing in a queue for the photocopier having a chat you should clock out.

“I’ve been doing this job for 40 years and not once have I seen anything that comes close to this.”

So what sticks in this tosser’s craw?

The email, sent to 31 workers by two team leaders in the benefits department at Carlisle City Council, reads:

“In order to ensure maximum output is produced, the working ethos within the office will need to change.

“Staff should be aware of the reason why they are here, which is to work and not to treat the office as a day-to-day holiday camp.

“It is not a requirement for you not to talk to your fellow colleagues, but you should ensure that non-work conversations are kept to a minimum.”

The email warns against social-networking, sport or fashion websites, looking at photographs and posting adverts on for-sale or wanted websites, too.

It reads: “Staff should log into systems first thing and not “catch up on gossip”.

“Smokers are required to clock-out when they want a cigarette. Surely it is not unreasonable to expect you to clock-out if you wish to have a 10-minute conversation with a colleague about the weather?

“The way we have worked previously cannot be sustained in the current economic climate and we must all change our ways.”

But dammit – what happened next?

Dr Jason Gooding, the Council’s deputy chief executive, said this approach to managing staff had fallen short of the high standards the city council had come to expect of its team leaders and managers.

“We will be working with managers and staff in revenues and benefits to ensure that positive lessons are learned following this experience.

“This is an isolated incident and does not reflect the management style we are working hard to develop at the city council.”

This means Alf will not be advising Tony Ryall to take advice from the council.

Rather, he should hire the team leaders who have been rebuked by their bosses, and bring them to New Zealand to head the State Services Commissin.

This entry was posted on Sunday, January 30th, 2011 at 8:36 am and is filed under Public service. You can follow any responses to this entry through the RSS 2.0 feed. You can leave a response, or trackback from your own site.