Will Maggie Mutu complain again to Joris about racial confrontation? Probably not 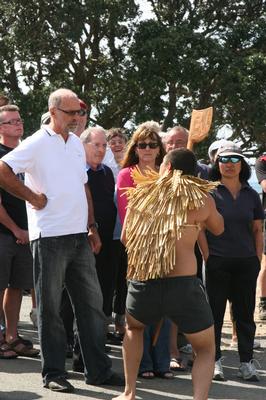 Waitangi Day has dawned and Radio NZ National has dished up an especially sugary dollop of pap for the kiddies at Stortytime, including The Treaty, by Bernard Gadd, told by Riwia Brown, Karanga, by Lynne Taane, told by Roma Potiki, and Whenua Tapu – Guide Rangi, by Caroline Down, told by Rima te Wiata.

There’s plenty of similar stuff in store for adult listeners, including “The Te Papa Treaty Debates 2011” from just after 4pm through until 5pm. During this time the radio audience will be subjected to an overdose of yapping about…

Power-sharing in the 21st century, with Whaimutu Dewes and Joris de Bres. Co-chaired by Claudia Orange and Carwyn Jones

Alf will be watching sport on the telly at that time. Any sport will do to steer clear of Joris: synchronised swimming, underwater hockey, tiddlywinks, pigeon racing…

Far North Mayor Wayne Brown had an enlightening encounter, not so long ago,

He received a call from the press asking if he had any comment on the announcement from the Race Relations Commissioner’s Office that they were taking no further action on a complaint against him.

My comment was “How do you know all this?” Especially when I was not aware that there was a complaint in the first place, nor who was it from, nor what had they alleged that I had done!

I had heard rumours of something like this, but as Mayor there are more rumours swerling around over various allegations of various things than I have neither the time nor the energy to have carried out, so I ignored them, foolishly thinking that if such a complaint did exist then I would be contacted by the Race Relations Commission.

No, they just tell the press that they are not taking further action. I rang them to get confirmation of the complaint allegedly from Maori activist and perpetual complainer Margaret Mutu concerning events at the Taipa illegal occupation of council land by some of her dissidents.

“Can you confirm this complaint and why wasn’t I told”, I asked. We are too busy to contact complainees was the answer.

“How busy, how many complaints do you get, tens, hundreds, thousands, how many?” I persisted. “Don’t interrupt me” was the response.

As Mayor of his patch and hence the elected community leader, he was understandably aggrieved at what he calls a pathetic announcement to the press, but not to him, that no further action was being taken.

But he should have had more than a whiff that the complaint had been laid, because on 26 November last year the Northern Advocate reported:

She is complaining about the treatment of protesters occupying land at Taipa Point.

Mrs Mutu said the group that gathered at Taipa Point at the end of October to meet with members of Matakairiri/ Ngati Kahu were briefed by Mayor Wayne Brown.

She claimed the Far North mayor had egged the mostly Pakeha crowd into aggressive behaviour at the powhiri.

Mayor Brown said the claims lodged in the complaint were outrageous and inaccurate.

“When I first heard of the complaint I thought it was a joke,” he said.

“I’ve had nothing in writing.”

The office of the Race Relations Commissioner confirmed a complaint had been received and said it was responding.

Oh, and let’s note that Maggie Mutu said in support of her complaint:

“The evidence of the attack on protesters is in the television coverage.

Maggie was miffed when the Human Rights Commission said her complaint did not amount to a breach of freedom of speech by the mayor.

“There’s a high threshold in terms of freedom of speech. People can say things that are offensive but not unlawful,” said commission spokesman Gilbert Wong.

Under the Human Rights Act, the commission’s primary responsibility was to deal with discrimination on the grounds of race, gender, age, religious and political beliefs.

“We do not police how people speak,” he said.

And a damned good thing.

“The Race Relations Act is very weak and although the mayor’s behaviour was reprehensible, the legislation won’t allow action to be taken against him.

“We’ve always known that legislation protecting people is very weak since the 1970s when it was first introduced.”

The legislation is too weak for her liking.

Therefore – obviously – it can’t be applied to stroppy buggers hurling abuse at our Prime Minister.

Alf is sure Maggie was outraged by the hullabaloo at Waitangi yesterday when that Popata feller was to the forefront in accusing John Key of being the enemy, a murderer and a thief.

She would be dead keen to lay another complaint about this aggressive and inappropriate behaviour with Joris.

But she will anticipate this would be a waste of her time, because that freedom-of-speech stuff will prevail with Joris.

She might even be tempted to agree with Mayor Brown that Joris should be sent out into the big wide world to get a proper job.

Brown has been deliciously trenchant with his criticism:

If I announce that I have found no evidence that the Race Relations Conciliator is a paedophile (which is true as I haven’t looked for any evidence and there probably is none), then at least ten percent of the population will think he is one!

That’s the sort of useless rubbish we get from wasting taxes on dickhead departments like the Race Relations Conciliator.

Better to just shut them down and let us all learn to get on without help from urban liberals who don’t live in mixed society like we all do up here in the Far North where the coastline that the government is giving away is.

Alf couldn’t have said it better.

This entry was posted on Sunday, February 6th, 2011 at 9:45 am and is filed under Race relations. You can follow any responses to this entry through the RSS 2.0 feed. You can leave a response, or trackback from your own site.