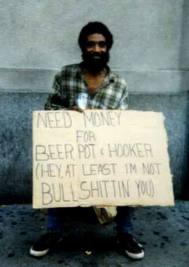 Life is a matter of making the right choices.

Alf is somewhat astonished to learn that Kanwaljit Singh Bakshi, the first Sikh to be elected to our Parliament, is backing away from giving folks the impression he might regard beneficiaries as “freeloaders”.

Alf’s astonishment is that many citizens similarly have a dim view of beneficiaries.

And so they would be sympathetic about his membership – but only until Friday – of the Facebook group “I hate poor people”.

It seems he had been signed up to the group since 2009.

The group has 398 members, according to the Sunday Star-Times.

This makes it a somewhat sad little outfit, woefully lacking in good organising skills, bearning in mind it was set up to express displeasure at those on benefits and low incomes.

Alf reckons he could whip up 398 new members in a 30-minute stroll through a suburb like Remuera or Khandallah.

But it seems the outfit now has only 397 members, because

… the Papatoetoe India-born MP said he did not join the group himself and was unaware of it.

“I don’t remember joining it,” he told the Sunday Star-Times.

“I never joined it. If by mistake someone has joined it, I will definitely remove it myself … if someone has done it on my behalf, I apologise.”

Bakshi needs to tighten up on his management skills, because he says three of his electorate office staffers, and others at parliament, had access to his Facebook account and could have signed him up.

The MP said he “normally” maintained his own Facebook account but, when he learned he was a member of the online group, said his staff also had access and that he would carry out an investigation and disciplinary action could follow. “I can’t say I’d sack them but I will remove Facebook access from them and make sure I am the only one who can access the account.

Oh dear. Somone in the party PR departent perhaps has suggested this line of defence.

Worse is a distancing of himself from the freeloader label.

Asked whether he shared the internet group’s assertion that beneficiaries were “freeloaders”, Bakshi replied: “The government is putting up policies making sure those who need help get it.”

But if he had simply told the SST reporter to bugger off, Alf would have respected him and offered to buy him a drink in Bellamys, although he is not too sure about the Sikh position on alcohol in general and good scotch in particular.

Let’s not forget that Prime Minister John Key come under fire in recent days for saying nothing more inflammatory than that being on a benefit is a lifestyle choice.

Answering questions from Labour in parliament yesterday, Key defended his government’s efforts to help the “underclass”, a term he coined while in opposition in 2007.

Key said the global recession had contributed to an increase in food poverty.

“But it is also true that anyone on a benefit actually has a lifestyle choice,” Key said. “If one budgets properly, one can pay one’s bills.”

“That is true, because the bulk of New Zealanders on a benefit actually pay for food, rent, and other things. Some make poor choices, and they do not have money left.”

Somone from the Coalition to End Homelessness, a do-gooder outfit made up of social agencies including the Salvation Army and Lifewise, described Key’s comments as outrageous.

But they sounded pretty good to Alf.

Oh, and let’s not forget the contribution from David Bennett, another of Alf’s colleagues who happens to be admirably candid in his views on poor people.

During the recent Debate on the Prime Minister’s Statement Bennett nicely rubbished the Labour lot and the Greens “for using the personal stories about people who are in trouble, and about their family members, and all that” and for trying to blame the system. But –

A tosser called Eddie wrote in The Standard the nice thing about David Bennett is he says what other Nats are smart enough to keep quiet.

But it depends who you are.

The government is not there to make life better for bludgers. Or freeloaders. Or the criminals who are being banged up in jails for crimes against honest hard-working citizens.

In fact, in their case we are moving to ensure that more and more bad buggers get life. Not a better life – just life.

This entry was posted on Sunday, February 20th, 2011 at 8:59 am and is filed under Politics, Social welfare. You can follow any responses to this entry through the RSS 2.0 feed. You can leave a response, or trackback from your own site.