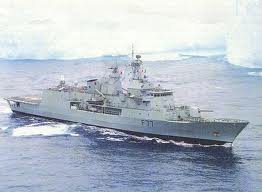 Te Kaha... rebuffed after a bit of speed dating.

A parliamentary scribe by name of Martin Kay is banging on today about a United States navy helicopter landing on the deck of the New Zealand navy ship Canterbury.

Wow. Let’s stand up and salute.

… the most significant sign yet of the thaw in military relations.

The word “significant” gets lots of use.

Kay’s report involves an MH60 Seahawk helicopter which conducted flight deck training on the Canterbury on Tuesday as part of a joint humanitarian aid mission to Tonga.

The two ships are conducting a joint operation to take medical and engineering aid to the Pacific and were off the reef of Niuatoputapu, a small island in Tonga.

Kay says the fact the two ships are operating together

… is itself a significant step in the growing military ties between the two countries.

It is the first time the two navies have conducted one-on-one operations since the United States cancelled military contact in response to New Zealand’s nuclear ban in the mid-1980s.

Canterbury Commander Jim Gilmour is quoted as saying the helicopter transfers were significant.

“This is the first time a US Navy helicopter has landed on a RNZN ship during an exercise for many years. This resumption in collective training will pay dividends should our two defence forces be called upon to collaboratively respond to natural disasters in the South Pacific .”

But we haven’t finished with significant accomplishments.

The mission to take aid to Tonga and Vanuatu is notable because of the involvement of ships from both countries. Previously, New Zealand Defence Force personnel have worked from a single – US – ship.

The contact is the most significant between the two navies in more than 20 years.

We are reminded that the frigate Te Kaha engaged in a brief exercise with a US destroyer and two Japanese frigates off Japan on its way to the US last June.

But that encounter lasted a few hours and was described by Defence Minister Wayne Mapp as “speed dating”.

It finished on a sour note. Te Kaha berthed in a civilian dock in Seattle, rather than the navy base.

So the speed dating on that occasion came to nothing – a brief encounter followed by a serious rebuff.

Alf is delighted to hear the more recent getting-together has been so successful. He is a great admirer of the Americans and is keen to see relations improve to the point where we finish up with a free trade agreement.

He is also delighted to hear the Canterbury is able to sail so far from our shores.

A year or so ago our government was claiming two Australian-built frigates were unseaworthy and refusing to accept the vessels, leaving them in limbo at the Williamstown docks.

A good account can be found at WA Today –

Defence contractor BAE Systems, which inherited the deal to build the vessels after taking over defence builder Tenix last year, has confirmed to The Sunday Age that two patrol vessels ordered by New Zealand in 2004 have been rejected, and both parties are now locked in mediation.

The New Zealand Government is claiming that the vessels, each worth about $70 million, would be about 100 tonnes overweight and unable to sail in Antarctic waters, with insufficient allowance for extra equipment to be added.

The doughty Mapp on that occasion had travelled to Melbourne for talks with BAE Systems and described the project as “a mess which we are working hard to clean up”.

The vessels were among seven ordered as part of New Zealand’s $400 million “Project Protector”, all of which had been due at the end of 2007.

Of the seven vessels that had originally been ordered from Tenix, only one, the multi-role HMNZS Canterbury, is now in service, with four small patrol vessels due to become operational within weeks.

But even the Canterbury has been plagued by problems, with design flaws reportedly restricting operations.

And so Alf thinks Kay missed the biggest triumph in what happened in the Pacific this week. It’s that the good ship Canterbury did not buckle under the weight of the American chopper.

This entry was posted on Friday, April 15th, 2011 at 9:24 am and is filed under Defence. You can follow any responses to this entry through the RSS 2.0 feed. You can leave a response, or trackback from your own site.