How does the UN eliminate human rights abuses? By giving the elimination task to seasoned abusers 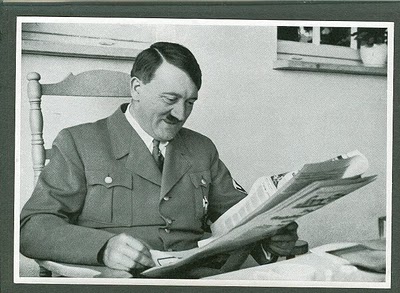 "Come and read this, Eva - the UN has put Austria on its Human Rights Council."

Alf’s laughter after the naming of new appointments to the UN Human Rights Council could be heard throughout Eketahuna North.

The idea that the world’s human rights should be placed in the care of some of these countries (some would say all) is absurd.

According to the Press Release, six countries that have never previously served on the council are among 15 new members of the Geneva-based body.

It was all deliciously democratic and involved a round of balloting among UN Member States.

It would be great to know which ratbag countries NZ supported.

In the upshot, Austria, Benin, Botswana, the Republic of Congo, Costa Rica and Kuwait will make their debut on the Council next month, starting three-year terms on the 47-member panel that allots seats according to a formula based on world regions.

Austria’s reputation in the world – of course – is tainted by its inclination to racism.

Amnesty International mentions this in its rundown on the country’s human rights record.

Non-white Austrians were more likely to be suspected of crime and ill-treated by police. Complaints of police ill-treatment from members of ethnic minorities were often followed by an inadequate response by both the police force and the judicial system; complaints were not properly investigated, and police officers were seldom prosecuted and lightly sanctioned.

Between April and mid-2009 the Viennese police conducted a large-scale operation based on ethnic profiling. In April, in response to a rise in burglaries, law enforcement officials were instructed to carry out searches in the houses of all known people of Georgian and Moldovan origin, without concrete grounds of suspicion, in order to question the residents and to establish whether they possessed stolen goods or burglary tools.

Oh, and let’s not forget the torture.

The authorities failed to implement safeguards against torture and other ill-treatment.

Torture victim Bakary J., a Gambian citizen, had still not received compensation or any form of rehabilitation. He had been tortured by three police officers in Vienna in 2006 and was still at risk of deportation for residing illegally in the country. On 20 November, the Disciplinary Appeal Commission decided to dismiss from office two police officers involved in the case. A third officer, now retired, lost all pension benefits relating to his public employment.

When it comes to the Congo, Alf hopes he has identified the right one – there’s a Democratic Republic of the Congo and a Republic of Congo.

Neither is too hot in the human rights department.

In the July 2009 presidential election, President Sassou-Nguesso was selected to a new term.

This election was marred by the lack of an independent electoral commission, the disqualification of several opposition candidates, and the intimidation of journalists. After his election, Sassou-Nguesso eliminated the position of prime minister, further concentrating executive power in his own hands. A postelection demonstration by the opposition was forcefully halted by the police, and opposition leaders were barred from leaving the country.

Press freedom is increasingly restricted and government security forces are apt to use excessive force to suppress peaceful demonstrations.

Members of opposition political parties last year were denied the rights to freedom of assembly, expression and movement.

After using tear gas and live ammunition to disperse a demonstration against the July 2009 elections, injuring some, the government banned all opposition demonstrations and restricted travel of opposition leaders.

As recently as 2010, several demonstrations have been banned in Benin. Prison conditions remained poor due to overcrowding.

According to official records, the last execution was carried out in 1987.

Despite the reduction over the years in the number of executions and death sentences, the death penalty is still provided for in the Beninese criminal code. At least five people were sentenced to death in 2010.

Amnesty International credits Botswana with frequently speaking out against democratic abuses across the African continent, often one of the only regional voices to take such a stand.

However, while transitions to power in Botswana have been seamless, the same ruling party has been in power for the last 40 years and succession is frequently guaranteed by a term limited president stepping down in favor of his vice president in order to allow that person to run in the next election as an incumbent. This makes it difficult for opposition parties to gain traction. Further, state media control also challenges any opposition party’s ability to run on an equal campaign footing.

Further on we are informed –

The Botswana government has been accused of dispossessing the San from their land in the Kalahari Desert because of the vast diamond fields present in the region. The San, also known as Bushmen, are southern Africa’s first inhabitants and consider the Kalahari their ancestral lands. They won a court decision in 2006 in Botswana’s High Court declaring they were wrongly evicted and should be allowed to return. However, after the judgment the attorney-general said the government was not obliged to provide essential services to the Bushmen. Mining activities in the region make it difficult for the San to access water and they are blocked from access to boreholes. Currently, most San are crowded in resettlement camps in less than desirable living conditions

Inevitably, Amnesty International has dug up some human rights concerns in Kuwait.

Women were granted the right to vote in May 2005, but violence against women in society continues. Foreign workers remain vulnerable to abuse and exploitation, particularly female domestic workers, who have virtually no protection at all. Many Kuwaitis remain classified as “bidoon”, that is, without citizenship.

Migrant workers continue to experience exploitation and abuse, and to demand protection of their rights.

Some were deported after participating in mass protests. The government promised to improve conditions. There are freedom of expression concerns, and several journalists were prosecuted in 2009. One case of torture was reported.

Amnesty International has overlooked Costa Rica in the report which Alf consulted.

But the USA can be counted on to keep an eye on human rights abuses in every country but its own.

It has criticized Costa Rica for the excess of prisoners without a firm trial date due to delays in court proceedings.

A report from the Department of State warned that a criminal court may hold suspects in prison until a year before the start of the trial, and one year more for the appeal.

It notes that such delays are major human rights violations in Costa Rica.

Although the government continued to improve prison conditions during the year, overcrowding, poor sanitation, lack of health services, and violence among prisoners remained a problem in some prison facilities. The Ombudsman’s Office investigated all complaints and referred serious cases of abuse to the public prosecutor. Illegal narcotics were readily available in the prisons, and drug abuse was common.”

The report states that in Costa Rica there were no reports that the government or its agents committed arbitrary or unlawful killings and no reports of politically motivated disappearances. But –

“Although the constitution prohibits the practice of torture and other cruel, inhuman, or degrading treatment or punishment and the government generally respected this prohibition, some members of the security forces committed abuses. Any statement obtained through coercion is invalid, and the government investigated, prosecuted, and punished agents responsible for confirmed cases of abuse.”

Of course, the idea of being chided by the US for keeping people in prison without trial, or for torturing prisoners is…

Alf won’t go on to examine the records of the UN Human Rights Commission’s other newly elected members. Each has served a stint in the past – Burkina Faso, Chile, Czech Republic, India, Indonesia, Italy, Peru, Philippines and Romania.

It’s enough to say the world’s human rights are in highly incapable hands.

A bit like finding places on the Law Commission for the Mongrel Mob, Black Power and a representative of the inmates of Paremoremo.

This entry was posted on Sunday, May 22nd, 2011 at 8:56 am and is filed under Human rights. You can follow any responses to this entry through the RSS 2.0 feed. You can leave a response, or trackback from your own site.