Left hand down a bit – oh, bugger, it looks like Italy is closer than we thought 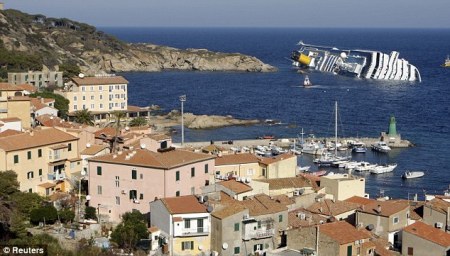 The short distance between ship and shore is what most amazed Alf, when he checked out the Daily Mail’s pictures of the cruise ship which capsized off the coast of Italy.

The Costa Concodia overturned after hitting rocks or a sandbar.

But it was only just off the coast.

It finished up so bloody close to a nearby village that it was in serious danger of becoming a road hazard.

This proximity to dry land makes nonsense of the accounts given by some passengers of this being like the sinking of the Titanic.

Here are some of the Daily Mail’s eye-witness accounts:

Another passenger who would only give her name as Silvano, said: ‘There was just complete and utter chaos and panic. No from the crew seemed to know what they were doing. It was just like something from the Titanic.

‘Some of the crew were telling us to go back to our cabins while others were saying go to the life boats – it was obvious we were in serious trouble because we heard a terrible scraping noise.’

Another passenger Mara Parmegiani said ‘it was like a scene from the Titanic.’

‘Have you seen ‘Titanic?’ That’s exactly what it was,’ said Valerie Ananias, 31, a schoolteacher from Los Angeles who was traveling with her sister and parents on the first of two cruises around the Mediterranean.

Several hours passed before another ship, the Carpathia, turned up to help the Titanic passengers, and the Titanic had struck an iceberg far from shore, for starters.

Helicopters plucked to safety some 50 people who were trapped on the liner, while ferries collected the rest taking survivors to the port of Porto Santo Stefano on the nearby mainland.

Only three deaths had been confirmed at the time this item was posted, although up to 70 cruise ship passengers were still missing.

Italian news agency Ansa said 4,165 out of the 4,234 people on-board were safe but officials did not know the whereabouts of the rest.

Divers have spent the day searching the seas around the Costa Concodia, which overturned after hitting rocks just two hours after setting sail on a seven-day cruise.

The boat’s captain, Francesco Schettino, was being quizzed by police.

An important question must be whether he knew where he was.

Captain Schettino today told maritime investigators that charts showed he was in waters deep enough to navigate, but reports emerged that the boat was four miles off course when it ran aground.

A gaping 160ft gash was torn in the hull, which quickly filled a large section of the ship with water, causing it to list to one side and creating panic within.

The captain’s apparent navigational shortcomings suggest he was all at sea.

But if he had been, the ship wouldn’t have hit the rocks, a sand bar, or whatever.

And if the rocks, sand bar or whatever had not abruptly halted the cruise, the ship could well have finished up breaking local traffic laws, perhaps crashing a red light and colliding with a car, bus or truck.

This entry was posted on Sunday, January 15th, 2012 at 10:30 am and is filed under Safety, Tourism. You can follow any responses to this entry through the RSS 2.0 feed. You can leave a response, or trackback from your own site.

One Response to Left hand down a bit – oh, bugger, it looks like Italy is closer than we thought