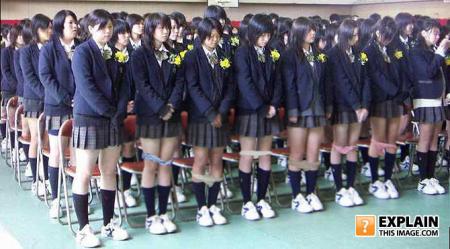 This photo was sent to Alf this week with a challenge: please explain what’s going on.

The hard-working member for Eketahuna North doesn’t know for sure the circumstances in which the photo was taken.

But he has a shrewd idea of what might be going on.

The picture no doubt was taken in a Chinese school and most of the lasses in the front row obviously were wearing made-in-China knickers.

The picture must have been taken before Zimbabwe’s authorities banned the importation of second-hand underwear.

Alf supposes a Zimbabwean garment purchaser had visited the all-girls’ school and was inspecting the goods, contemplating an order for the next shipment before imports of these knickers into Zimbabwe became illegal.

Zimbabwe’s finance minister made a shocking discovery recently about the underwear-buying habits of his countrywomen: he learned that many buy secondhand lingerie at flea markets and used clothing stalls.

To stop the practice, Tendai Biti – the Minister – introduced a ban on hand-me-down underpants that has now been made into law.

The new legislation makes it illegal to import or sell “articles of secondhand undergarments of any type, form or description, whether purchased, donated or procured in any other manner.”

The ban has been welcomed by NewsDay, a Zimbabwean newspaper, which described the legislation as “one of the best laws that our country has put in place in recent years.”

The practice of wearing used underwear is “humiliating,” the newspaper said in an editorial.

“What nation have we become that knowingly subjects its people to humiliation and disease?”

It’s not the first such ban in Africa.

Rwanda banned the sale of secondhand underwear from December 31, 2011.

Ghana officially banned the practice in 1994, but only started enforcing the law last year after concerns that those wearing secondhand underpants risked infections.

But the ban in Zimbabwe isn’t winning wholehearted approval.

Outraged traders said the ban put their businesses and livelihoods at risk.

And one commentator brought women’s rights arguments and stuff about the law of supply and demand into considerations.

If there was no ready market for used underwear then the supply levels would fall. What it means therefore, is that, there are many women in Zimbabwe who can only afford second-hand underwear. The reason being, they are not economically empowered to afford brand new ones. For example, some rural women who resort to the use of dried cow dung as sanitary wear because they cannot afford to buy a packet of sanitary pads selling for only US$1. Would those women be able to purchase brand new underwear?

Alf must confess to gagging on his whisky at that point of his research.

And Mrs Grumble has been left wondering if Kiwi women know what poverty is all about when they bleat about being hard done by.

This entry was posted on Saturday, February 4th, 2012 at 2:18 pm and is filed under Uncategorized. You can follow any responses to this entry through the RSS 2.0 feed. You can leave a response, or trackback from your own site.