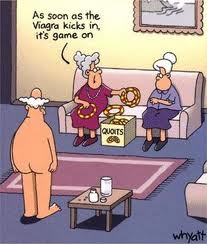 Dunno of you know the Lysistrata story.

The play by a Greek bloke called Aristophanes, originally performed in classical Athens in 411 BC, is a comic account of Lysistrata’s mission to end The Peloponnesian War.

She persuades the women of Greece to withhold sexual privileges from their husbands and lovers as a means of forcing the men to negotiate peace.

But it will be interesting to see how elderly Italian blokes react to a threat to their horizontal recreation.

END_OF_DOCUMENT_TOKEN_TO_BE_REPLACED

If Paul Quinn has been provoked in a car-parking squabble, he could be nominated for a knighthood

Alf is a bit more enlightened about goings-on in Wellington’s Courtenay Place this afternoon, as he catches up with the day’s news.

Headlines like that will always tease Alf into reading the fine print, to find out who dunnit.

In this case, the Herald was scandalously unhelpful, saying only that –

A former National MP allegedly punched another customer in the face as shocked tellers looked on at an inner-city Wellington bank after an argument over a parking space.

Wellington police yesterday confirmed receiving a complaint from a man alleging he had been assaulted by another man on Monday last week in Courtenay Place. They said the incident was still under investigation.

There was a bit more detail.

But the all-important detail – the name of the former National MP – was missing.

END_OF_DOCUMENT_TOKEN_TO_BE_REPLACED

The link between playing football and testosterone levels has been established too late in Alf’s life for him to benefit.

But he will be bringing it to the attention of family members in the appropriate age bracket, encouraging them to take up football in the interests of getting much more foliage on the Grumble family tree.

He does this reluctantly, because he happens to look askance at the behaviour of football players whenever they score a goal. They kiss, hug and otherwise carry on like poofters.

Perhaps that’s because scoring – actually – is a rare event in many matches. The score typically can finish 1-0 after an hour and half or so of running up and down the field and kicking the ball around. Sometimes after all that grunting and sweating we get a scoreless draw.

But Alf can see there’s another side to the game.

END_OF_DOCUMENT_TOKEN_TO_BE_REPLACED

But be ready to embrace the kaupapa.

Now we know what happens when efforts to clean up the environment encounter somebody’s kaupapa.

We get a racial divide and shit hits the fan.

Alf can only record his bemusement as members of several groups – intent on protecting waterways from cow poop – consider how best to proceed.

END_OF_DOCUMENT_TOKEN_TO_BE_REPLACED

But would these beasts have gone the same way as the moa?

The tosser at a blog called Reading the Maps recently mocked Noel Hilliam, the retired farmer from Dargaville

… who has become infamous, over the past quarter century, for making a series of bizarre claims about New Zealand history.

Over the years Hilliam has discovered a Viking city in the forests north of Dargaville, Spanish ships in the sandy mouth of Kaipara Harbour, a Nazi submarine filled with gold in the Tasman Sea, and the skeletons of an ancient tribe of giant white people in remote caves.

Again and again, Hilliam has failed to produce evidence for his sensational claims, and faced ridicule. Again and again, he has presented gullible journalists with new fantasies.

Hilliam is on the button with that stuff about Vikings.

If it was rubbish, Maori Television would not have sent five executives to an indigenous broadcasters’ conference in the far north of Norway.

The top brains at Maori Television are as fiscally sensitive as anyone here in Parliament.

They can come up with bloody good cultural explanations for whatever spending is involved.

They know – as Alf does and as Hilliam does – that the indigenous people of this country have Viking blood pumping through their veins.

END_OF_DOCUMENT_TOKEN_TO_BE_REPLACED

The Finns apparently can't duck out for a cup of coffee at Starbucks?

The poor bugger is copping a great deal of flak over his comments that Finnish people are uneducated and disrespectful to women.

A Stuff report says his remarks have sparked outrage and made headlines in the European nation, although Alf can not verify this because he does not read Finnish newspapers.

Hence he is reliant on the aforementioned report at Stuff, which is somewhat discomforting, because no-one at Stuff (Alf imagines) reads Finnish either.

And so they are reliant on the fulminations of a few furious Finns.

END_OF_DOCUMENT_TOKEN_TO_BE_REPLACED

So what has happened to a red-blooded ex copper?

The tossers at the Sunday Star-Times today have headlined former MP Ross Meurant’s concerns about some feisty foreign-policy changes now on the drawing board.

Murray McCully is taking credit for these proposed changes, at least for now, although (just quietly) Murray is a dab hand at distancing himself from anything controversial if things go awry.

And he knows how not to be spattered when the shit hits the fan, which might be an appropriate expression in this case, because Meurant imports – or was thinking about importing – fertiliser.

Phosphate, as it happens.

But let’s not let that small detail get in the way of a figure of speech.

The proposal that concerns Meurant is simple and – in Alf’s book – compelling.

It’s the idea of doing whatever we think is right, no matter what the United Nations might think, and slapping sanctions on countries that irritate us.

END_OF_DOCUMENT_TOKEN_TO_BE_REPLACED

Paul Holmes – a self-confessed cocky little bastard, although we didn’t really need to hear it from him – got some things right and some things a bit wrong in a column in the NZ Herald today.

He has gone out to bat for Tame Iti and dishes up a few morsels of history to persuade us the stroppy Iti has good cause to be angry because the Tuhoe people have been given a raw deal.

The New Zealand government has always displayed a capacity for savagery and vindictiveness in their dealings with Tuhoe.

No doubt Tuhoe did suffer a raw deal.

Whether we should suffer Iti’s antics as a consequence is another matter.

END_OF_DOCUMENT_TOKEN_TO_BE_REPLACED

Who owns culture and knowledge? You can count on us getting the wrong answer

Will Maori pay royalties to the Italians for a cup of this?

If it weren’t for the Treaty of Waitangi, knowledge would be knowledge. Full stop.

But nah. We have knowledge. And we have Maori knowledge.

A burgeoning bit of the Treaty industry relates to efforts to protect this Maori knowledge and ensure that if anyone makes a buck from it, then Maori should be first to cash in.

Long ago we set up a Māori Trade Marks Advisory Committee, whose members are appointed by the Commissioner of Trade Marks under the Trade Marks Act 2002.

The function of the Advisory Committee under section 178 of the Act is to advise the Commissioner whether the proposed use or registration of a trade mark that is, or appears to be, derivative of a Māori sign, including text and imagery, is, or is likely to be, offensive to Māori.

It keeps a few officials in work, obviously.

END_OF_DOCUMENT_TOKEN_TO_BE_REPLACED

Murray McCully’s meddling at MFAT – might it bring about his ministerial demise?

It looks like your hard-working MP will have to wait to see if his formidable talents are appropriately recognised by The Boss with a long-overdue promotion.

That howz-yer-father about the ACC and the Pullar woman culminated in Nick Smith’s resignation from his ministerial portfolios.

Great (although Alf is not publicly displaying his approval).

Trouble is, Nick’s ministerial jobs have been given to others, at least for now.