Who owns culture and knowledge? You can count on us getting the wrong answer 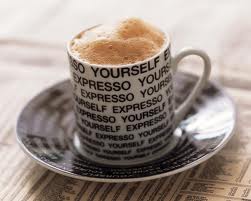 Will Maori pay royalties to the Italians for a cup of this?

If it weren’t for the Treaty of Waitangi, knowledge would be knowledge. Full stop.

But nah. We have knowledge. And we have Maori knowledge.

A burgeoning bit of the Treaty industry relates to efforts to protect this Maori knowledge and ensure that if anyone makes a buck from it, then Maori should be first to cash in.

Long ago we set up a Māori Trade Marks Advisory Committee, whose members are appointed by the Commissioner of Trade Marks under the Trade Marks Act 2002.

The function of the Advisory Committee under section 178 of the Act is to advise the Commissioner whether the proposed use or registration of a trade mark that is, or appears to be, derivative of a Māori sign, including text and imagery, is, or is likely to be, offensive to Māori.

It keeps a few officials in work, obviously.

Oh, and then there’s the branch of the industry that prepares and fights cases such as the WAI-262 Claim on indigenous flora and fauna and Maori cultural and intellectual property rights.

The claim was lodged 20 years ago, the Waitangi Tribunal hearings were completed in 2007, and the tribunal only recently released its comprehensive report on WAI-262 titled ‘Ko Aotearoa Tenei’.

Example: a recent seminar at Victoria University which (those considering attending were advised)

…provides an opportunity for expert speakers and participants to engage in a discussion on the many challenges and opportunities WAI-262 presents for matauranga Maori, resource management, and other legal, political, cultural and economic issues.

Ta moko expert Mark Kopua and editor Ata Te Kanawa spoke on Intellectual Property and Taonga Works. The Tribunal apparently uses the term ‘Taonga Works’ to refer to artistic and cultural works that are significant to Maori culture or identity including haka, ta moko, mateatea, korowai, whakairo, “or any other artistic or cultural work”.

Howard Morrison’s “How Great Thou Art, for example???

This relates to Crown agencies that have core responsibilities for New Zealand’s (including Maori) culture, heritage, education, and science.

Matauranga Maori is Maori knowledge. This includes Maori language, science and technology, laws, history, systems of property and value exchange, and rituals and ceremonies. It also includes forms of expression such as art forms like weaving, carving, ta moko, haka, whaikarero, and so on. But, more fundamentally, it incorporates core Maori cultural values. Of these, the defining principle of matauranga Maori is whanaungatanga, or kinship – the philosophy that explains the intimate relationships between iwi and hapu and the natural world. Another core value is that of kaitiakitanga, or cultural guardianship – the system of law through which iwi and hapu are obliged to nurture and care for taonga (treasured things).

Oh, and there’s no show without Punch (as they say) and so Moana Jackson was there, too, to speak on processes by which the Crown engages with Maori when it is developing New Zealand’s position on international instruments (such as treaties and declarations) that affect Maori culture, identity and traditional knowledge.

As a blogger at Freakonomics points out, the question of who owns culture is a big one, especially when products associated with certain cultures or nations turn out to be very popular in the marketplace.

The Italians should have maintained at least some control (and profit) by trademarking those words or the word “Italian”. Then they could have sued anyone who tried to sell Italian espresso.

The issue has popped up in the US in a dispute between the national retailer Urban Outfitters and the Navajo Nation, a federally recognized Indian tribe.

Navajo-style clothing and prints are hot on the runways these days. Urban Outfitters had followed (or led) suit, offering up such items as a Navajo flask and Navajo “hipster panty.” The Navajo, who control dozens of trademarks in the word Navajo, responded with a lawsuit in federal court.

The question posed for Freakonomics readers is what economic purpose is served by giving a nation or a people control over the use of their name in commerce.

If Italy — or Italian-Americans like us — could sue Starbucks (not to mention California Pizza Kitchen), would the world be a better place? It would certainly be a very different market if Italy, France, and China could all control how the words “Italian”, “French”, and “Chinese” were used by restaurants and cafes around the US.

The trademark law the Navajo invoke in their suit rests on the notion that marks serve as information shortcuts. Trademarks designate the source of goods so consumers can make informed choices in the marketplace. But words don’t always tell consumers who made a good, or who sponsored it. Often, words are used simply to describe a good – to tell us what it’s like, what it does, what it contains — and the ability to do this effectively can be central to a free market’s functioning: it helps put buyers and sellers together.

There is more to the case, the blogger acknowledged, including a federal statute governing “Indian arts and crafts.”

But the core issue is a very important one in an increasingly global economy. Many people in many places are aware of the styles associated with peoples in other places, and they often want to wear those styles.

The current Navajo craze, whatever its origins, reflects that desire. Firms like Urban Outfitters are generally free to sell Navajo-style clothing and even to use the word Navajo, as long as they use it to describe what the clothes look like, rather than who made them.

As the Supreme Court made clear in the recent case, that is so even if some consumers are confused and mistakenly think that the Navajo people are responsible for Urban Outfitters’ Navajo panties.

The Navajo may have a strong ethical claim to some uses of the word Navajo.

But ethics is another department. Here we are talking about a legal and economic matter, and the Navajo are no different than the Italians.

Whatever trademark rights they possess will be trumped by market competition if it can be shown—as Urban Outfitters will surely try to do—that buyers of, say, the Navajo panty understood “Navajo” as designating a style, and not as a statement of origin.

Maori – of course – are a special case and obviously should be treated differently.

This likely means we will stuff things up and get things wrong.

This entry was posted on Friday, March 23rd, 2012 at 11:21 am and is filed under Commerce. You can follow any responses to this entry through the RSS 2.0 feed. You can leave a response, or trackback from your own site.