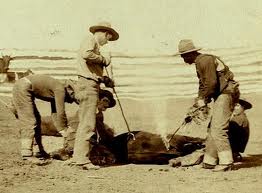 A new game is being played in the Wairarapa.

Dunno how many people are playing, but Alf has no burning urge to give it a go.

Stuff introduces us to the game this morning in an item about a young farming student who has spent five days in hospital after he and two fellow students played.

Page Gilmour, 17, went to Masterton Hospital after a large burn on his arm became infected after the incident at a Wairarapa wool shed this month.

It’s described as a “branding game”.

And, at first blush, the rules aren’t too complicated.

Players apparently press red-hot shearing tools on each other, if Alf has properly interpreted the game Page was playing.

He and two older students at Taratahi Agricultural Training Centre, south of Masterton, heated up metal shearing combs before pressing them on each other’s arms, searing the skin.

All three students are reported to be boarders at the centre.

The scoring is unclear but the bloke who finished up in hospital presumably lost points somewhere along the line.

Alf supposes a prerequisite for participation is an abundance of bravado and a serious shortage of brain power.

This supposition is supported by the next bit of the Stuff story, which says Page has since posted a photo of his wound on Facebook, saying he went to hospital on May 13 and was discharged on May 17.

“Haha i almost would of lost my arm lol haha if i went to the hospital a day later,” he posted. “I have2 take heaps of pills lol.”

Page Gilmour’s father, Glen, speaking from Katikati, described his son as a good kid who had never done such things before.

“He’s probably been watching too much TV.”

Dunno what TV viewing has got to do with it.

Mrs Grumble watches a great deal of telly and assures Alf she has never felt an urge to brand herself as a consequence.

But she also said she just might lose her marbles some day and be tempted to brand herself.

In that dire circumstance, she would be inclined to burn “Alf” into her skin because “Alf” wouldn’t leave much of an impression.

This remark was not as wounding as it seems. She meant it would leave a much smaller impression on her skin, in terms of scarring, than “Mrs Grumble”.

Then Stuff tells us a bit more about the branding game.

Taratahi spokeswoman Brigitte Marulli de Barletta said the “branding game” happened after the three students were sharpening their tools on a grinder.

The trio started at Taratahi last July, and were off campus with their class at the time, taking part in a practical shearing component to go toward a national certificate in agriculture.

In the past some Taratahi students had burned smiley faces on themselves with cigarette lighters, but nothing comparable to the recent incident, Ms Marulli de Barletta said.

This leaves Alf wondering about the eligibility criteria to get into Taratahi.

Being a bright bugger apparently is not among them.

Indeed young Page is showing the sort of aptitude that suggests he is shaping up to take a crack at winning a Darwin Award.

This entry was posted on Wednesday, May 23rd, 2012 at 10:04 am and is filed under Sport. You can follow any responses to this entry through the RSS 2.0 feed. You can leave a response, or trackback from your own site.