Even if the fuel gauge is wrong, it’s smart to come back to earth with some fuel in the tank 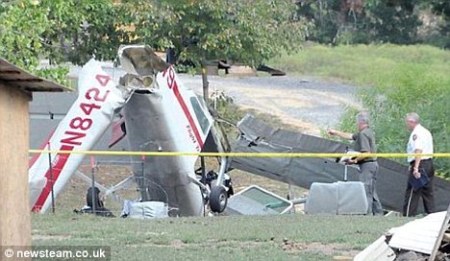 On second thoughts, maybe the fuel gauge was accurate.

You get to learn too late, sometimes, when it’s smart to fly with somebody else.

A good example is the 21-year-old trainee pilot who died in the plane crash pictured above.

According to the Daily Mail (here), Jaskinder Kaur Samra was a passenger in the rented 1969 Cessna aircraft.

It was piloted by an American friend, Abraham George, 24, who also was killed.

A second passenger, Shaun Thacker, survived the crash after wrapping himself in a duvet to protect his body.

From his testimony at the inquest, we learn what the pilot had to say moments before the prang:

The witness told the pilot the fuel gauge was low, to which Mr George replied:

‘I’ve done a maths calculation about the distance and I trust my maths more than a 1969 fuel gauge.‘

Shortly after those fateful words on the 427-mile flight, from New Smyrna Beach, Florida to Chattanooga, Tennessee, the engine lost power and the plane crashed.

Thacker’s survival meant he was able to tell Black Country coroner Robin Balmain the tale of the crash on September 24, 2010.

Alf is bound to say he always trusts his fuel gauge, although sometimes he runs close to the wire before finding a petrol pump.

But that’s when driving a car.

He would get real nervous if “empty” was coming up on the fuel gauge in an aircraft he was piloting and if it looked like the laws of gravity might soon be playing a critical role in determining where the plane would land.

Assuming there was some disagreement between the fuel gauge and his own mathematics, you can be sure the fuel gauge reading would be the one to heed, no matter how old it was, but that’s because Alf is a heavy subscriber to the “better safe than sorry” school of thinking. Anyway, he recalls his maths teacher being more than somewhat scornful of his calculating prowess, back in his school days.

Mind you, experience comes into this. Alf is most likely to start thinking about the need for a refill when his glass is empty, and in all his experience of emptying glasses he has never had to rely on a gauge to tell him when it’s time to cry “same again, please.”

This entry was posted on Monday, July 16th, 2012 at 10:15 am and is filed under Safety. You can follow any responses to this entry through the RSS 2.0 feed. You can leave a response, or trackback from your own site.