Woman who lied to Winz had better get used to making a buck in India – by begging, maybe 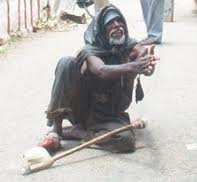 It’s not as demanding as being a barista…

Are we supposed to sympathise with a silly woman who lied to welfare officials to get more money?

More of my money and yours, by the way.

As a sob story, accordingly, what this bint did does not amount to much.

But the Herald on Sunday is dining out on it here.

A young mother facing a new life in India has spoken of her regret after telling Work and Income she had split from her husband so she could get a bigger benefit.

Now the family faces an uncertain future as her husband is ordered out of the country.

So – have we got this right? – she did the lying but he is being ordered out.

And she deserves our sympathy – why, exactly?

Or is the story merely intended to serve as a lesson against lying?

Oh, dear. Becoming pregnant – something that happens to most wives at some time, and often enough to women who aren’t wives – doomed the couple to “hard times”

Too exhausted to hold down her job as a barista, she was forced on to a $150-a-week benefit.

So what happened next?

With the prospect of earning twice as much as a “single mother”, Heremaia says she lied to Winz out of desperation.

“It didn’t feel good at all. I had no choice,” she says. “It was really hard, trying to keep a straight face. I love my husband more than anything.”

Heremaia says she did it so she could provide for their son, now 7 months old.

Telling lies with a straight face – we are supposed to believe – is hard yacker, too.

No it isn’t. Politicians (left and green ones, mostly) do it all the time.

As for the crap about “no choice”…

We all have choices.

So what about the husband’s income-earning potential?

At the time, Sharma, now 23, was unable to earn money – his visa had been declined because he had not submitted documentation to prove he was in a relationship with Heremaia.

So having got more money by lying, the couple were now at a disadvantage, because to get the visa he needed, he had to be in a relationship with this fibbing female.

What a bugger, eh!

Trying to get the visa was their undoing.

The lie was caught when the couple sought ministerial intervention for his visa application.

Immigration’s operational support manager for visa service Michael Carley says Winz shares information with his team and Sharma’s claim of being in a relationship with Heremaia was at odds with her statement that her husband was an illegal immigrant who had returned to India.

And now for the plea for mercy.

Heremaia and Sharma say they deeply regret what they did: “It’s not worth lying for a few dollars. I wrote Immigration a letter telling them how I lied. I apologised and I gave them a reason why I had to do it,” Heremaia says.

Despite submitting a marriage certificate and their son’s birth certificate, Immigration NZ have advised Sharma to leave as soon as possible to avoid deportation.

And so the family are preparing to move to India, where they will live with Sharma’s parents.

It’s a future Heremaia is struggling to come to grips with.

“It will be hard for us to adapt to life in India. We don’t have enough money to support ourselves over there.”

And nor – she will find – do millions of other Indians have enough money.

She could always go looking for India’s equivalent of WINZ, but Alf suspects she won’t find it in a hurry.

If India’s WINZ was doing a brisk business, the streets of Indian cities would not be cluttered with beggars

Heremaia will soon find she becomes quite practiced at raising a bit of spending stuff as they do.

It’s not as hard as making cups of coffee.

This entry was posted on Sunday, September 23rd, 2012 at 12:18 pm and is filed under Social welfare. You can follow any responses to this entry through the RSS 2.0 feed. You can leave a response, or trackback from your own site.