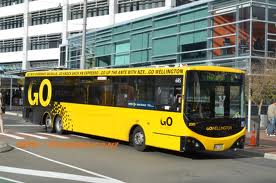 If you can’t see one of these coming, maybe you need to see your optician.

Alf was a tad bemused by an item at Stuff which tells of an Aussie fellow’s ideas for making the streets of the capital safer.

The need for better safety measures than those already in place has been necessitated by your average Wellingtonian’s curious inability to keep out of the way of buses.

Especially along the so-called Golden Mile.

The buggers wander off the pavement and then – wham!

They’ve been knocked over.

The nature of the problem (as Stuff’s report here makes plain) borders on the bizarre.

There are plenty of ideas for keeping the citizens safe.

These ideas most obviously include pedestrian fences and fining jaywalkers.

For those of Alf’s constituents who have not been to Wellington, The Golden Mile encompasses Lambton Quay, Willis St, Manners St, and Courtenay Place.

The council has not ignored the accident toll.

Temporary fences separating the road and footpath were recently put up on Willis St and an extra set of traffic lights was installed.

The council is also considering dropping the speed limit from 30kmh to 20kmh between the Lambton Quay/Panama St intersection and the far end of Manners St.

Alf can walk faster than that.

Why not hire some tosser to stroll along in front of the buses with a flag, to alert the people to the nature of the threat represented by the vehicles he or she is preceding (which, by the way, are so bloody big you would think they would be noticed).

Perhaps the flag-bearer should play the bagpipes for good measure.

But nah. Let’s listen to this Aussie feller who favours hiring clowns for a month to dance along the street or hanging flags over the road.

This would make the area safer for pedestrians, David Engwicht is quoted as saying.

So what would he know about it?

Well, according to Stuff –

The Brisbane-based social experimentalist researches the psychology of public space and how the layout of streets and spaces affects the way people behave.

He is well known for his quirky attempts at slowing down drivers, including sitting on a throne in an intersection and wearing horns on his bicycle helmet.

He will speak at the World Safety Conference in Wellington this week.

His key bit of advice is that taking risk out of an environment actually makes it more dangerous.

“The street needs to be broken up into a series of living rooms, even things like putting lights or flags across the top of the street makes the space more intimate and more like a room,” he said.

“You can use landscaping but if that’s not possible the way that you treat the space is really important – even a simple thing like brick bands across the street.”

This Engwicht bloke is not a fan of pedestrian fences because they create a false sense of safety for motorists.

Your basic motorist figures no pedestrian is going to be crossing here, and so they speed up.

“[Then] some idiot will jump the fence and cross the road.”

He reckons fining jaywalkers would finish up with the central-city becoming a traffic-only space rather than a civic and economic space.

And police data show most cars and buses on the Golden Mile are already travelling at less than 20kmh.

His idea of having clowns dancing down the street for a month entertaining bus drivers and pedestrians would change the way people look at the issue, he said.

“It would slow the buses for at least that month, but it would start to establish a different type of dialogue rather than this angry kind of thing I’ve seen in the papers.”

He has other ideas, but Alf is happy to stick with – and endorse – the clowns.

One reason is that the city is amply supplied with them.

They can be seen while Parliament is in session sitting on the Opposition benches.

If it so happened a few of them were run over by a bus while on road-safety duty, Alf would not lose any sleep.

This entry was posted on Monday, October 1st, 2012 at 4:33 pm and is filed under Transport. You can follow any responses to this entry through the RSS 2.0 feed. You can leave a response, or trackback from your own site.