Sorry to say, Boss, it seems you should dump red meat and switch to fish for memory recovery 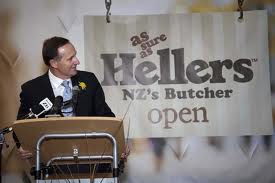 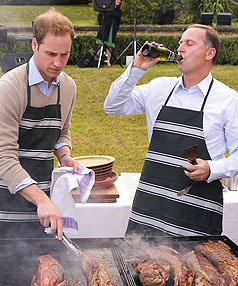 There’s been something of a fuss in the media of late about The Boss’s dodgy memory.

Alf strongly suspects reports of his memory failures – and yep, there have been a few – have resulted in support for him fading just a bit in opinion polls.

This is a matter of huge concern to the Member for Eketahuna North, whose future as a Government MP rather as an Opposition MP after the next election is dependent more than somewhat on support for The Boss improving.

Accordingly Alf has been studying memory loss and what can be done to remedy it, and he thinks he is on to something.

The Boss is a great bloke for getting his choppers around a chunk of red-blooded meat.

END_OF_DOCUMENT_TOKEN_TO_BE_REPLACED

President Malcolm? The SST has gone beyond the pale with that idea for constitutional change

They’ve got to be kidding – aren’t they?

The awful tossers who run things at the Sunday Star-Times today have gone beyond the pale by tossing up the names of Robyn Malcolm, Dave Dobbyn and Jason Gunn as prospective Presidents of New Zealand.

Dame Susan Devoy, Richie McCaw and Bernece Mene are on the list too, plus two lefties – Geoffrey Palmer and Helen Clark – and just one obvious Nat, John Key, who already has a job as our leader.

The name of Alf Grumble is glaringly absent, but perhaps that’s because the editors at the Sunday rag recognise that Alf would never put his hand up as a candidate for President of NZ, because he happens to be a staunch monarchist, and sees this constitutional review nonsense as precisely that. Nonsense.

END_OF_DOCUMENT_TOKEN_TO_BE_REPLACED

Nice one, Pete – we would like to know where the revenue-grabbing speed cameras are hidden, too

Good on ya, Peter Dunne, for having a crack at the cops over their hidden speed cameras.

He is trying to find out where in the Wellington region the cameras are being used.

Alf might encourage him to extend his campaign to cover the Wairarapa.

The story popped up on the telly last night (see here).

END_OF_DOCUMENT_TOKEN_TO_BE_REPLACED

After a posting to Saudi Arabia, our next MP will be looking forward to a welcome-home snifter – or two

He hopes the newcomer will be welcomed as heartily as Alf was welcomed when he was our newest MP, back in….

Well, let’s just say it was back a few years.

According to Stuff (here), Foster-Bell will take up the list seat vacated by Jackie Blue, who has quit to become the new equal employment opportunities commissioner, something she surely will do with much more aplomb and good humour than her very earnest predecessor.

END_OF_DOCUMENT_TOKEN_TO_BE_REPLACED

Dunno if Federated Farmers has farmed out its public relations to some outfit in India, or somewhere even more remote, at weekends.

The fury has sadly gone from a press statement issued this evening.

The bloke whose name is attached to the statement is not an Indian, of course, and may well want to boast it’s all his own work.

Alf’s would counsel him to plead confusion somewhere between drafting, sign-off and release, or crossed wires, and blame the distant PR team for placing so much emphasis on the bleeding obvious.

The press release (here) might just as well have declared that beer will spill if you drop your mug, or that the sun will rise again in the morning (in some parts of the country anyway).

END_OF_DOCUMENT_TOKEN_TO_BE_REPLACED

The Daily Mail has done a nice job on Romany Blythe, an unpleasant Pommy sheila – a bloody teacher, too – who held a death party and encouraged revellers to ‘piss on her grave’.

It seems the NHS did a job on her too, giving her bigger boobs while – it would seem – leaving her heartless, brainless or both.

The grave upon which the charmless Ms Blythe urged revellers to piss, of course, was that of Margaret Thatcher. Baroness Thatcher. Great British Prime Minister.

Ms Blythe is reported to have sparked outrage by creating an internet page called: ‘The witch is dead.’

On it she urged more than 5,000 people to attend a death party in central London on Monday.

But as the Daily Mail points out (here), the aforementioned Romany Blythe did nicely, thank you, from policies promoted by Dame Margaret.

END_OF_DOCUMENT_TOKEN_TO_BE_REPLACED

It was great to see Russel Norman get his come-uppance from Mr Speaker in the House this afternoon.

Norman obviously hoped he was going to screw some politically embarrassing information out of our splendid Minister of Energy, Simon Bridges (although Alf likes to think he would be an even more splendid Minister).

Obviously 20 years is a long time, and it would have required lots of beavering away in the database to come up with the figures.

So Bridges short-circuited things and said yes, the reforms were on the right track.

END_OF_DOCUMENT_TOKEN_TO_BE_REPLACED

An eel up there could have wrecked him, as it did when a Chinese prank went fatally wrong

Gotta express profound bewilderment tonight at the bizarre things that happen to some blokes.

Mind you, maybe we wouldn’t know if medical staff didn’t spread the word by behaving in a very unethical way and leaking clinical information that strictly speaking should remain confidential.

For example, if it weren’t for unethical staff who accessed a patient’s sensitive medical images, we might never have learned about the Kiwi bloke who had an eel removed from his rectum.

END_OF_DOCUMENT_TOKEN_TO_BE_REPLACED

Trouble is, Jackie’s appointment requires her resignation as an MP. She will take up her new job on 4 June.

This opens absolutely new opportunity for Alf’s promotion, as the appointment of Tim Groser to head the World Trade Organisation would do.

Second, if we had no Equal Employment Opportunities Commissioner, we could save a bundle of money without in any way harming our society.

END_OF_DOCUMENT_TOKEN_TO_BE_REPLACED

If Tim Groser is successful with his WTO ambition – who will take over as NZ’s Minister of Trade?

Your much-admired MP’s Cabinet ambitions have just been rekindled.

Is there a vacancy?

Not yet. But before too long, Trade Minister Tim Groser’s job could be up for grabs because he is saying (here) his bid to become the next director-general of the World Trade Organisation is no longer “a long shot”.

Why he has shared this information with the NZ Herald before confiding in Alf is somewhat disappointing.

But here’s wishing him all the best.