If the royals had turned up at the right time, of course, we would have fed them on moa 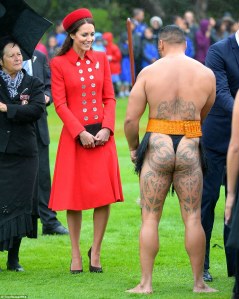 “And what do you wear, sir, when you are not welcoming members of the Royal Family?”

It seems the British media were duped into reporting that Prince William and his missus would be feasting on protected wood pigeon and that “topless female Maori dancers” had been told to cover up for the royal tour.

According to one report (here), the hoaxer is a former Waikato University student, a bloke who represented himself to the British press as a Maori expert.

The name of this special citizen from Down Under is Tredegar Hall, a recipient of a prestigious Maori scholarship at the university in 2010.

He is reported as saying topless female performers were ordered to cover up for the big occasion so they would not embarrass the Duke and Duchess of Cambridge. Male dancers would also break with “ancient traditions”.

“Usually the men do not wear anything under the piupiu, the flax skirts, but because of the high-profile guests they’ll wear black undies to welcome them,” the Daily Express reported.

What happened to the black undies worn by the bloke shown above, whose picture has featured in British newspapers.

Come to think of it, what happened to the flax skirt?

They might also be tempted to wonder what sort of progress has been made in this country since the signing of the Treaty of Waitangi back in 1840. Do we live in houses? Do we all run around almost starkers? And so on…

They don’t appreciate how proud we Pakeha are of our indigenous treaty partners and their culture, and how we have accorded them a special place in our way of doing things, and when it comes to greeting anybody we love to step back and leave things to Maori welcoming parties.

Folks from other cultures haven’t lived until they have had tongues poked out at them and spears waved at them and been subjected to war-like whoops and shouts, which are all intended to assure them how friendly we are in this country.

Not to forgot the nose rubbing rather than a tired old shake of the hand.

It’s a serious pity this Hall feller has given the Brits such a wrong impression of our highly civilised state by telling the paper the couple would be offered traditional food, including the kereru, “if they are lucky”.

Hall’s bullshit was carried in the Daily Express and Daily Telegraph ahead of Prince William, wife Kate and baby George’s 10-day trip to New Zealand, which started in Wellington yesterday.

So what does he have to tell us about his prank and its consequences?

Hall, a member of London-based Maori cultural group Ngati Ranana, appears to have gone to ground after the comments were published at the weekend.

The Waikato Times nevertheless has tried to flush out a bit of information about Hall.

A Google listing for his Linkedin page said he worked at New Zealand Immigration in London, but his full Facebook and Linkedin profiles have been removed. Last month, Hall was one of two people that represented New Zealand at Commonwealth Day celebrations in London, and he was a successful academic and Maori leader during his time at the University of Waikato.

Last night, university communications adviser Ann Huston said Hall graduated with a bachelor of social sciences in 2010, and a master of social sciences (first-class honours) and a graduate certificate in te reo Maori in 2013. He was one of two students to receive a Dame Te Atairangikaahu Scholarship, which was set up in the name of late Maori Queen to ensure the further education of Maori people, in 2010.

Hall is former co-president of the Waikato Maori Students’ Association and was a student ambassador, a 2010 university press release said.

Obviously he is one of our indigenous persons and is therefore special.

Dunno what he was wearing when he portrayed himself as a Maori expert. Obviously not black undies because, by his own account, the men here usually do not wear anything under their flax skirts. It was only because of the high-profile guests that they would wear black undies to welcome the royals.

This entry was posted on Tuesday, April 8th, 2014 at 10:17 am and is filed under Maori affairs. You can follow any responses to this entry through the RSS 2.0 feed. You can leave a response, or trackback from your own site.

2 Responses to If the royals had turned up at the right time, of course, we would have fed them on moa