If you want to see a cover-up, leave Crusher alone and check out the dress code in Qatar

The Grumbles have never been great enthusiasts for soccer, or any sport where the players are apt to kiss and hug each other and otherwise display unseemly behaviour.

The won’t, therefore, be travelling to Qatar for the 2022 World Cup, some eight years hence.

Among other things, Alf by then will be … well, let’s say of mature years in the age department.

In some respects this is a shame because it means the Grumbles won’t enjoy the spectacle of soccer fans – a boozy, brawling bunch of hooligans, by all accounts – getting to grips with the dress and behaviour code of Qatar.

The Qatar government will be demanding these fans cover up “from shoulders to knees”.

This wouldn’t trouble the Grumbles, of course, because they keep their aging bodies well covered in this country and regret that younger people don’t do the same.

The Qatar authorities are giving the rest of the world plenty of warning about their expectations by releasing a set of pamphlets (which you can study on this post).

The Daily Mail has provided some of the details.

The pamphlets ask visitors to help preserve Qatar’s culture and values. They state: ‘If you are in Qatar, you are one of us. Please dress modestly in public places.’

It then adds: ‘Leggings are not pants.’

The campaign uses social media to help get its message across, including the use of its own Twitter account.

Lots of other recommendations are included in the campaign to publicise matters that visitors need to be wary of if planning to travel to Qatar.

Public displays of intimacy and affection are strongly discouraged in Qatar, for example.

So how is this going down among boorish British soccer buffs?

According to the Daily Mail:

The campaign has received a mixed reaction online.

One person responded: ‘If this campaign ran in the UK it would be blasted for being “racist”. Why is it suddenly acceptable elsewhere, regardless of religious or cultural beliefs? Basic human rights should be accepted globally, not just where some see fit.’ 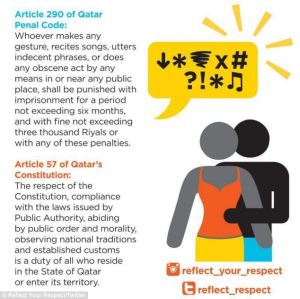 It so happens the Grumbles think people should dress modestly on all occasions. All public occasions, anyway.

Hence the dress code would pose no problem.

Moreover the Grumbles are not ones to kiss and hug in public (unlike woofter soccer players).

But whoa. Anyone who says indecent phrases or is involved in an obscene act in public could face up to six months in prison.

Alf would be sure to fall foul of the ban on indecent phrases, because he liberally peppers his verbal communication with what he calls robust language.

Just as well he doesn’t like football and can loudly demand that Qatar’s leaders stick their language rules right up the rear ends of their favourite camel.

This entry was posted on Thursday, May 29th, 2014 at 4:06 pm and is filed under Sport. You can follow any responses to this entry through the RSS 2.0 feed. You can leave a response, or trackback from your own site.