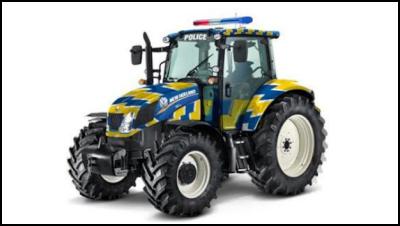 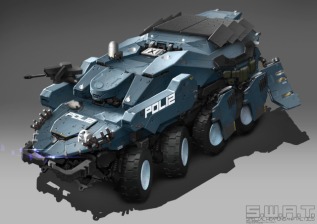 “What kind of crimes are we talking about here?” one woman asked, “Would the bomb only be used in the case of large scale civil unrest, or will they nuke the whole county the next time someone so much as shoplifts or jaywalks?”

“If anyone is curious they can swipe a Crunch n’ Munch [a packet of popcorn] or cross against the signal and see what the fuck happens,” he said.

Alf was disappointed when he brought this to the attention of The Boss and suggested we check out with the Yanks – as fellow members of The Club – whether we could get hold of one of these weapons.

It turned out he had seized on a news item from a satirical website.

Even so, the nuclear-deterrent idea came to mind when Alf learned today that:

Police are set to unveil the latest weapon in the fight against crime – a New Holland tractor.

The distinctive blue and yellow piece of machinery will be the centre of attention at a special launch at the Norwood Farm Machinery Centre at Te Awamutu today.

With a top speed of 40kmh, the tractor won’t be used for chasing criminals but will instead be a key piece in raising awareness of rural crime and promoting discussions among rural communities.

As part of that role, it will be placed at agricultural events around the country, including Hamilton’s National Agricultural Fieldays at Mystery Creek in June.

Police weren’t yet talking about costs (not with the newspaper, anyway) but said the tractor had been funded through a partnership.

A partnership with whom?

The newspaper can tell us a similar tractor retails for up to $60,000, depending on the model.

Obviously this figure registered with the Taxpayers Union, which relishes finding things like this to grouch about.

“This is the most bizarre crime-fighting tool since Police got Twitter. ‘Raising awareness’ doesn’t help the victims of crime.”

“At first we thought this was some sort of search and rescue asset. In fact it’s a PR gimmick to drag around A&P shows costing taxpayers up to $60,000.”

“The cost is probably equivalent to a junior constable. This tractor might make for good photos, but it is little consolation to that rural victims of crime whose cases go unresolved.”

Maybe it won’t cost that much, depending on the nature of the partnership.

But the timing is bad, because we Nats have been feverishly denying claims that police will charge community groups thousands of dollars a year for vetting the staff and volunteers who deal with society’s most vulnerable.

It seems the cops are a bit cash-strapped (much the same as Alf after his night out at The Green Parrot).

But they can’t charge for any of their services.

The Policing (Cost Recovery) Amendment Bill will allow them to charge a fee for services they do not consider core business for the public good.

Alf has been a bit slack and hasn’t read the Bill yet. But someone at Stuff is on the case and has reported:

Where an individual benefits from the use of the service, the bill proposes that person should pay for it.

The bill was before Parliament’s Law and Order select committee today, which heard from community groups and organisations opposing the changes.

He described the changes as  the “thin end of the wedge” and said once implemented, the government could charge for other police services without introducing new legislation.

He described the plan as “user pays gone mad”.

But Social Development Minister Anne Tolley said she did not support charity organisations having to pay for police checks.

“Which is why in the legislation there is provision for exceptions to be made, specifically to cover those organisations.”

The Government was still working through the process to figure how that might be applied, she said.

“The legislation had a particular ability to grant exemptions, and we were quite specific about it in all the lead-up and all the discussions around it,” Tolley said.

Martin Henry, a representative from the Police and Education Partnership, obviously wasn’t listening or was unaware of Tolley’s statement. He expressed his horror at hearing of the proposed charges to vet staff and volunteers, including those who work with children.

It was “absolutely critical” that everyone who worked with kids was vetted by the police, he said.

“Charging for that service seems to run against the whole theory and idea of public good, which is what police provide their services for.”

But assurances have come, too, from Jo Goodhew, lovely lady and our Minister for the Community and Voluntary Sector. She was asked if she supported the Government’s policy to charge charities for police checks; if so, how does charging charities hundreds of thousands of dollars a year for a service that is currently free help them to carry out the good work for our community?

She replied (quite rightly) that this is a matter for the Minister of Police, but submissions on the Policing (Cost Recovery) Amendment Bill were  being considered by the Law and Order Committee.

Many of these submissions asked the police to consider case-by-case exemptions for vetting fees, particularly for organisations that have many volunteers.

The Law and Order Committee will report back in May 2015, she said, “so I am watching this closely”.

Alf will be watching closely too.

This entry was posted on Thursday, February 19th, 2015 at 2:53 pm and is filed under Law and order. You can follow any responses to this entry through the RSS 2.0 feed. You can leave a response, or trackback from your own site.