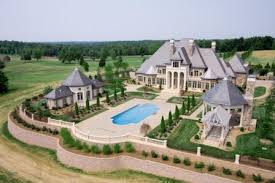 Let the loony lefties take over and this will become part of the country’s social housing stock.

The NZ Herald  has gone all soft and pappy today, telling readers if they want a state house or “social housing” with a view, forget it.

Beautiful views are banned in a draft new Government policy, the Herald bleats. Double garages and decks are out, too.

The tone is thoroughly disapproving.

But the draft policy makes a lot of sense to Alf. Anything contrary would be a daft policy.

If a property has a beautiful view, the buggers who live in it should pay for it. Not taxpayers.

It sounds like housing officials have the good sense to agree.

The draft of the Social Development Ministry’s “purchasing intentions” for income-related rental subsidies says the ministry will not approve subsidies for any houses with “attributes that increase the market rent without meeting the needs of the clients, for example, double garages, large outdoor decks, two bathrooms (in a small house), beautiful views”.

The draft apparently was shared with a group in Wellington on Thursday – presumably in the name of consultation – and posted online by Community Housing Aotearoa, representing non-profit agencies that now compete with Housing NZ for subsidies.

CHA director Scott Figenshow said he hoped the ban would have some flexibility.

Not necessarily. If they need two garages, they don’t need a state-subsidised home.

And if they don’t need two garages but are desperate for adequate housing, they can turn the second garage into a bedroom.

The Herald goes on to to say “activist John Minto” co-ordinates a new national tenant network. He said the draft confirmed that the Government wanted to put social housing tenants in “small, cheap places”.

“The policy is really to buy the smallest, grottiest places they can find and use that as an incentive to get people out,” he said.

“Why shouldn’t families on low incomes, who have the highest needs … They are the very people who would benefit from beautiful views, why should they be reserved just for the wealthy? It’s all wrong.”

He might just as well have tried to argue that families on low incomes, who have the highest needs, are the very people who would benefit from driving a Rolls-Royce.

Then he would argue the taxpayer should be providing them with this Rolls-Royce.

The Herald report happens to expose Minto’s leftie bullshit by pointing out that the the draft policy also declares the ministry wants “properties that are warm, safe and dry and properties that have modifications for disabilities”.

It says quality standards will require that landlords maintain homes “in a reasonable state of repair having regard to the age and character of the premises”.

Social Housing Minister Paula Bennett said the ministry was “perfectly justified avoiding high purchase prices because of things like large decks and the view, which don’t actually meet the housing needs of tenants”.

“We can help more people in need by making smart purchasing decisions, rather than diverting taxpayer dollars towards properties with higher prices due to extraneous features,” she said.

The Herald goes on to explain that the ministry has already carried out an initial registration of interest process for community housing providers to deliver 300 new homes for tenants qualifying for income-related rents in Auckland.

Qualifying tenants pay rents at 25 per cent of their income, and the subsidy tops up the revenue for community housing providers and Housing NZ to the market rent for the property.

And if any of the tenants are spotted driving a Rolls-Royce to park it in their double garage alongside the Lamborghini – well, Alf is counting on Paula to ensure they are paying for it all themselves and are not basking in a lifestyle supported by hard-working taxpayers who can’t afford such luxuries.

This entry was posted on Saturday, February 28th, 2015 at 11:16 am and is filed under Social welfare. You can follow any responses to this entry through the RSS 2.0 feed. You can leave a response, or trackback from your own site.