If the royals had turned up at the right time, of course, we would have fed them on moa

“And what do you wear, sir, when you are not welcoming members of the Royal Family?”

It seems the British media were duped into reporting that Prince William and his missus would be feasting on protected wood pigeon and that “topless female Maori dancers” had been told to cover up for the royal tour.

According to one report (here), the hoaxer is a former Waikato University student, a bloke who represented himself to the British press as a Maori expert.

The name of this special citizen from Down Under is Tredegar Hall, a recipient of a prestigious Maori scholarship at the university in 2010.

He is reported as saying topless female performers were ordered to cover up for the big occasion so they would not embarrass the Duke and Duchess of Cambridge. Male dancers would also break with “ancient traditions”.

END_OF_DOCUMENT_TOKEN_TO_BE_REPLACED

This thing about non-indigenous creatures in the Ureweras is a worry – how far will it spread? 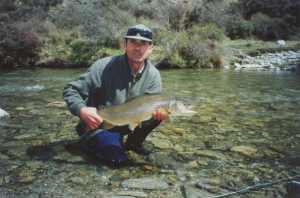 The fish must go – but can the angler conclusively prove he is indigenous?

The Grumbles are giving serious consideration to moving to the South Island. Somewhere in the Ngai
Tahu’s domain – it doesn’t matter exactly where, although sunshine hours and what-have-you will be among the factors given high priority. A comfortable club for gentlemen with good stocks of whisky is important, too.

If the decision to move is made, advice to follow will be given to all of Alf’s constituents.

END_OF_DOCUMENT_TOKEN_TO_BE_REPLACED

Our bloody Government does throw money around unnecessarily, Alf will concede in the privacy of his own home, although in public he staunchly defends everything his colleagues do and every buck they spend.

Thus publicly he will say Chris Tremain did a splendid job as Minister of Internal Affairs, before being replaced by that Dunne tosser.

On Chris’s watch, a series of projects to commemorate the centenary of the First World War was granted $2.7 million in funding by the New Zealand Lottery Grants Board.

The news of this new trough – sorry, fund – being set up for handouts was reported here.

END_OF_DOCUMENT_TOKEN_TO_BE_REPLACED

“Well, unfurl my flannels from the rooftop,” Alf fumed when The Boss mused on whether NZ should have a new flag.

For the most part your hard-working representative has a huge respect for The Boss. But now and again…

Perhaps dear old John fell under the republican spell of that Obama feller while the pair of them were walloping golf balls around a course in Hawaii during the Christmas holidays. Alf refers, of course, to republicanism as distinct from monarchy, not Republican versus Democrat.

Whatever has smitten John Key, it has erased the regard he should hold for the Union Jack and Southern Cross components of the national flag (especially the Union Jack bit). He would have them replaced – ye gods – by a silver fern.

END_OF_DOCUMENT_TOKEN_TO_BE_REPLACED

The money or the bag? Don’t be silly – we’re indigenous and accordingly want both

Alf has already recorded his huge admiration for the way our indigenous people can sniff out a trough and get their snouts into the swill.

Another of their admirable traits is their gall.

Alf has known some Pakeha oinkers who would be embarrassed if they thought he knew of the extent of their troughing.

Our indigenous oinkers feel no shame.

To the contrary, they regard it as their right under the Treaty to have we Pakeha fill their growing array of troughs.

And if we don’t fill the troughs deeply enough or quickly enough, they will holler about the bloody injustice of it.

END_OF_DOCUMENT_TOKEN_TO_BE_REPLACED

They are volunteers, right? So why should Maori wardens in Oz expect funds from NZ taxpayers?

Our indigenous people have wonderful olfactory senses, when it comes to sniffing out a funding opportunity. Or a public handout.

They put this sense to good use wherever they might be, including Australia, where they are by no means the indigenous people.

Sniffing a trough which NZ taxpayers will fill with a rich swill is one thing.

Finding someone to turn the tap to ensure it is filled is another.

But our indigenous people have another great skill. They know how to sniff out the right Pakeha politicians who will be sufficiently craven to oblige them with the money they seek.

END_OF_DOCUMENT_TOKEN_TO_BE_REPLACED

Margaret Mutu might eschew a Google search, but there are oral means of learning what’s what

Professor Margaret Mutu, who can be found doing her thing academically in the Department of Māori Studies at Auckland University, has a BSc, DipTchg, MPhil and a PhD.

What she could do with is a computer.

Maybe she eschews these things, because her work on Maori rights

…draws on the oral traditions of her ancestors of Ngāti Kahu, Te Rarawa and Ngāti Whātua passed on to her by her elders and drawn on extensively for the successful claims against the Crown.

These oral traditions perhaps rule out working with computers.

Moreover the computer is not the product of indigenous technology.

This would explain why Maggie Mutu does not know as much about the Maori Council as Alf quickly found out simply by using Google and reading what was on the pages he found.

END_OF_DOCUMENT_TOKEN_TO_BE_REPLACED

Where are those Maori soothsayers now, when we need to know about quakes and Wellington’s fate?

Alf’s mates needed a serious reproving when they mocked something they heard on National Radio.

The item that tested their credulity and triggered their mocking was about a Whangaroa kuia who told the Waitangi Tribunal the 1907 Tohunga Suppression Act had terrible consequences for her mother.

Listeners to this bit of radio news were told her mother could foretell the future.

But the Tohunga Suppression Act did those who practiced her craft a serious mischief.

END_OF_DOCUMENT_TOKEN_TO_BE_REPLACED

Yeah, body-snatching did happen back in Britain in the days before Alf’s great grandfather settled in New Zealand.

The Daily Mail (here) recalls how the illegal snatching of corpses – a common practice 200 years ago – had a greater influence on medical science than advances made during World War One.

At least, that’s what a bunch of Cambridge scientists were claiming a few months ago.

END_OF_DOCUMENT_TOKEN_TO_BE_REPLACED

So where can the Maori Council turn next in its vexatious efforts to nobble your hard-working government’s efforts to flog off a stake in Mighty River Power?

There was a time when their lawyers would be suggesting they head for London and the Privy Council.

But the Clark Government put an end to that in her ill-considered efforts to reduce this country’s links with the Mother Country, the Monarch and all that…

Maori voters – if they happen to sympathise with the Maori Council and fancied their chances before the law lords – should remember that, next time they go to the polls.