Alf can understand the disappointment of the solo mum with two young special-needs sons who bought a dunger and now regrets it.

He can’t understand her claim to have been duped.

Nobody forced her to buy the bloody car and she had every opportunity to walk out on the deal when the vendor (according to her story, anyway) denied her a chance to take a good look at what she would be buying.

He denied her a chance to take a good look at what she would be buying.

Did this not sound a very loud alarm bell?

END_OF_DOCUMENT_TOKEN_TO_BE_REPLACED

Yes, we can wish for wider roads – or we could drive on what we’ve got at appropriate speeds

No, it’s not built for speed….

A simple piece of good motoring advice is to drive to the conditions.

If the road is a bit rumpety, ease up on your speed.

And if you can’t stick to the road, probably you are driving too fast.

Alf brings this to the attention of his constituents, lest they come knocking on his door making demands for the Government to do something about our narrower roads.

He anticipates these calls on the strength of claims that a fatal crash in the central North Island had something to do with the condition of some of New Zealand’s state highways.

END_OF_DOCUMENT_TOKEN_TO_BE_REPLACED

Okay, so some blokes (with health problems) can lose control of their cars too but …

Mrs Grumble is chuffed this morning, after reading her NZ Herald on-line.

Among its contents are an account of a wayward motorist.

Actually, for the most part it is the same as a story published three weeks ago.

On April 1 the NZ Herald reported this –

A wayward motorist smashed into three parked vehicles, crossed four lanes of a highway and drove on to railway tracks before crashing to a standstill into railway station platform last night.

At that time Alf thought maybe it was an April Fool’s Day prank story.

END_OF_DOCUMENT_TOKEN_TO_BE_REPLACED

Sorry, Mrs Grumble, but here’s why it might be better if you gave up driving 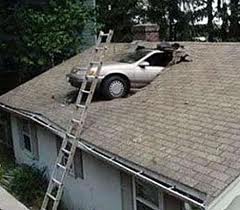 Alf had been reluctant to question Mrs Grumble about her driving skills, after she landed the family car in the situation pictured here…

Among other things, he is a highly sensitive feller who did not want to upset his wife.

Mind you, there was a political element to his thinking: if he raised her dander unduly she might portray her husband among the good citizens of Eketahuna North as a male chauvinist pig.

Not true, of course.

This morning, however, the matter must be broached.

END_OF_DOCUMENT_TOKEN_TO_BE_REPLACED

It’s a pity an Auckland tow-truck boss has refunded a motorist to avoid a Disputes Tribunal hearing. Alf would have preferred the claim had been put to the test and a considered judgement made.

He happens to harbour a low opinion of tow-truck operators whose business includes hauling illegally parked cars away (fair enough) but then charging an arm and a leg for the owners to get their vehicles back.

Having an operator come off second best would have been hugely cheering, although – to be sure – the outcome could have gone in the company’s favour.

He coughed up to spend time with his son and avoid wasting public resources, according to what he told the NZ Herald, although he believes he would have won the case easily.

END_OF_DOCUMENT_TOKEN_TO_BE_REPLACED

Alf likes to think his superior motoring skills entitle him to break the country’s speed limits, but that everybody else on the roads should comply with the law.

Hence he is delighted to learn the authorities are considering introducing point-to-point (P2P) cameras, to deal to every other tosser on the roads.

These devices can calculate how fast a vehicle is travelling over a prolonged distance, whereas the existing speed cameras can detect a vehicle’s speed only at a certain spot.

They are already used in parts of Australia and across the United Kingdom and Europe.

As Alf understands it, the system works by using two cameras to record images of all vehicles as they enter and exit a pre-determined stretch of road.

END_OF_DOCUMENT_TOKEN_TO_BE_REPLACED

New research is revealing about female motorists – but who is going to say so?

For personal safety reasons, Alf gave serious thought to suppressing the news in this post.

With the Alasdair Thompson furore fresh in his mind, he knows only too well what can happen to a bloke who tells it like it is or as they see it.

Mrs Grumble reminded Alf about discretion being the better part of valor, too.

But dammit, some things have to be said.

In Britain, the Daily Mail has been emboldened to say it, and this blog is going to do the same by drawing attention to the Mail’s report.

The Daily Mail headline says it in a nutshell: Women drivers ARE more dangerous behind the wheel, scientists discover

END_OF_DOCUMENT_TOKEN_TO_BE_REPLACED

If they are horrified by two road deaths, how will they respond to the death toll from killer cucumbers?

It's grim when these things start killing us.

A headline on the inevitable road toll story that adorns the Herald’s pages on Mondays is a load of bollocks.

The caption beneath a photo was just as silly:

So where in the story do we find why these have been labelled NZ’s deadliest roads?

The buggers who write this rubbish should be celebrating the fact that only two people were killed.

We have had a weekend of good weather in which thousands of people were out on our roads, driving in opposite directions often on narrow bands of highway or street and often at speed.

END_OF_DOCUMENT_TOKEN_TO_BE_REPLACED

The Government's VIP fleet in the highly improbable event of our having a Green Party Prime Minister.

The Greens didn’t take long to get back on top of Alf’s grumble list.

The buggers were up there two days ago, for their antics over Julia Gillard’s address to Parliament (which Alf has attended).

And they are there again today for kicking up a fuss over the Government’s ordering of a fleet of brand new BMWs.

Green Grinch co-leader Metiria Turei says this shows the Government is divorced from the needs of the public.

Radio NZ (and others) are reporting the details in a way that is bound to arouse public hostility.

END_OF_DOCUMENT_TOKEN_TO_BE_REPLACED

Top Gear could slip into reverse and hire a woman to become The Stig – with a pink helmet! 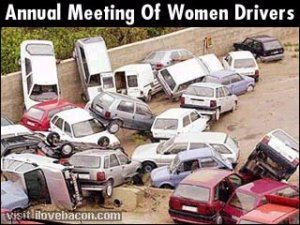 It’s unlikely to be any of the woman drivers who were gathered at the convention pictured here.

Or the woman driver who – if Alf has guessed correctly – pressed down on the accelerator instead of the brake.

But William Hill, one of the UK’s largest bookmaking outfits, is placing the odds of the next Stig being a lady at 4-1.

Gamblers can also bet on what colour the next Stig will wear.