Alf is by no means astonished that somone is promoting the idea that Maori prefer to buy stuff from Maori rather than from non-Maori. To sell more stuff, accordingly, a business needs more Maori salespeople.

It’s just an extension of the idea promoted by Hone Harawira, the Maori Party MP (and hothead) that his offspring should only marry Maori.

But Alf would take issue with the notion that non-Maori are similarly guided by ethnic considerations when they pop into a shop to buy something, and that they prefer to deal with people of their own “culture” (a nice way of saying “race”).

END_OF_DOCUMENT_TOKEN_TO_BE_REPLACED

If a country can’t be taken away, what exactly is being shipped off to China in vast shiploads? 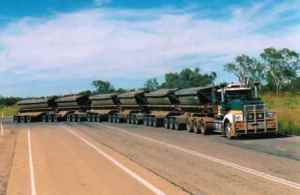 Maybe with bigger trucks we could shift the lot by the end of the century...

Alf salutes the PM this morning, on reading that John Key doesn’t want New Zealanders to become tenants in their own country as foreign companies seek to buy up farms.

The Government therefore may look at law changes.

The issue has arisen in the wake of a Chinese company’s bid to buy the Crafar farms.

Key would not comment directly on the Crafar farms issue because it’s before the Overseas Investment Office, although it’s fair to think that in this case the OIO is taking a bit more time to look into the matter than it normally tends to do.

If we had Olympic Games for rubber stamping overseas investment approvals, the OIO would be among the medal winners, probably with a gold and a world record.

END_OF_DOCUMENT_TOKEN_TO_BE_REPLACED

Pylons, property rights and a protracted process appropriated from the processors of good cheese

Alf has a great deal of sympathy with the farmers who look determined to block Transpower from their properties in South Canterbury.

It’s all about the bloody great pylons Transpower must plant and maintain on private properties so we can all get our electricity, plug in our PCs, read this blog, and so on.

Underpinning the stand-off, it seems, is a point of principle: Transpower wants to pay a one-off lump sum by way of compension for its use of private property. The farmers want an annual rental.

But the parties seem to be taking a helluva long time to reach an agreement.
END_OF_DOCUMENT_TOKEN_TO_BE_REPLACED

Cleaning up the street takes time

(as dictated to Mrs Grumble)

Great news from the capital. Housing New Zealand has won a second court battle to evict families with gang links.

Winning the legal battle – and strengthening Housing NZ’s right to get rid of troublesome tenants quickly – is one thing.

Throwing out troublesome tenants is another.

Especially when the buggers can find the money to keep the legal fight going.
END_OF_DOCUMENT_TOKEN_TO_BE_REPLACED

Alf congratulates the High Country farmer who has won a significant test case against the Crown.

He agrees with the litigious farmer – or rather, he firmly hopes – the victory will open the door for a change in legislation.

The case has made a nonsense of the idea a property has an “amenity value”, based on some notion about its scenic value. It’s a notion that would put a huge price on the interior of the Eketahuna Club, if Alf was doing the valuing, because he finds it hugely attractive.

Jonathan Wallis of Minaret Station opposed increases to rent for High Country leases after a Government review included amenity values in calculating the rents.
Amenity values take into consideration the value derived from the location or view the property has.

Many High Country farmers believe amenity values are irrelevant and unfairly inflate the cost of leasing the land.

Mr Wallis won his case at the Land Valuation Tribunal in Dunedin and says the victory paves the way for the Government to change its policy.

That should scuttle amenity values. Alf harbours a dark suspicion it might not.

It looks like a bloody no-brainer to Alf: the public is entitled to know if a chunk of property might have been contaminated by chemicals. Providing them with this information is more important than any threat to property prices.

Perhaps brains are in short supply on the Hawke’s Bay Regional Council.

But it seems the buggers resisted revealing the locations of thousands of potentially contaminated sites.

Now the ombudsman has ruled that public safety is more important than the possible effects on property prices.
END_OF_DOCUMENT_TOKEN_TO_BE_REPLACED

Your chance to pour beer for Alf 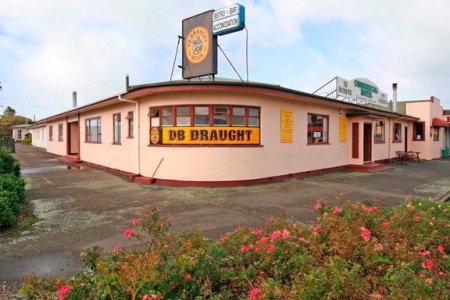 Fancy serving Alf with a beer or three?

The Commercial & Industrial Hotel Motel is for sale – it’s one of two pubs, here in Eketahuna.

Among its features: it has a busy main road frontage – State Highway 2; there are two bars, eight guest rooms plus a flat at the rear; there’s a TAB plus four gaming machines; and – says the ad – there is an excellent rural community.

The ad doesn’t mention Alf dropping in regularly, which – of course – should be a strong selling point when words gets around.

This hotel would be an excellent husband and wife operation and has the scope to be enhanced by further developing the business with food and accommodation. So stamp your mark!

Opposite the hotel is an 18 hole golf course popular with weekend golfers who stay at the hotel.

Kim Herbert is the agent.

Too bad for tenants and landlords who are keenly awaiting reform to tenancy laws.

It looks like some Labour plans to protect tenants will be scrapped, such as a bothercome cap on tenants’ liablity for damage.

But he is determined to return legislation “in a timely manner.”

He wouldn’t have to move too fast to outpace Labour’s reform efforts.
The Bill was introduced to Parliament in May last year after Labour (slow buggers) began consultation on it in 2004. It was intended to better clarify the rights and responsibilities of tenants and landlords.

The official statement hadn’t been posted on the Beehive website, when Alf wrote this. But Voxy had an account of it.

Mr Heatley says: “This Bill is well-intentioned in that it aims to encourage stable tenancies in homes which are well-looked after while enabling landlords to better manage them.”

However, concerns have been raised about some specific provisions of the Bill and matters for which provision was not made…

Examples are set out in the media statement.

Among the issues, the proposed bill was going to stop real estate agents charging letting fees. This will be reconsidered.

“As Housing Minister, I have to be satisfied that what has been drafted appropriately balances the rights and obligations of both tenants and landlords.”

He is comfortable with many aspects of the Bill, but is troubled that some specific provisions may deter future provision of private rental housing.

That’s of particular concern given predicted growth in housing demand.

He has asked that the specific aspects of the Bill he has identified be considered with swift and targeted consultation.