A remarkable skill: Peter Dunne doesn’t have to read a book to measure its muck content

Gotta say there’s nothing quite as satisfying as pitching an election message to a bunch of well-heeled old farts.

They will even give a big cheer to the likes of Peter Dunne if he says the right thing.

Peter struck the right note in his home patch of Ohariu when he was questioned about Nicky Hager’s Dirty Politics and about the ethics and integrity of politics.

According to this report at Stuff,

…the UnitedFuture leader said he would not read it and labelled it “muckraking”.

It was a sentiment that drew the biggest cheer from the 150-strong crowd at Johnsonville’s Malvina Major Retirement Village yesterday, the large majority of whom were residents.

That’s the right way – and the right-wing way, hurrah – to deal with trash dressed up as a literary revellation.

END_OF_DOCUMENT_TOKEN_TO_BE_REPLACED

The Clayton Weatherston wipe-out: a Sunday rag’s role in a shabby case of biblioclasm 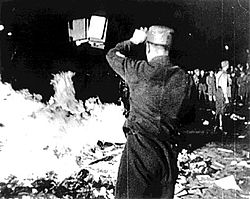 Alf was about to express his astonishment at a major newspaper championing censorship.

But no. In fact he is by no means astonished. The populist press will do anything to curry favour with its readers, and if that means forgetting about guiding principles – aw shucks, why not?

One of the principles typically promoted by newspapers is entrenched in the phrase “the public has a right to know”, or some variance of it.

The buggers will often delve into people’s private lives, shrieking – if thwarted – about a denial of the public’s right to know.

When it comes to private lives the public only sometimes has a right to know, but it does have a huge appetite for gossip.

So when we come to shaping public attitudes to book burnings, what role should we expect a newspaper to play?