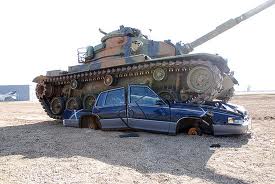 Oops...there'll be no more burnouts in this car.

Alf had never heard of Karn Clarrie Forrest until today, but is delighted to report that the 18-year-old from Otago looks like becoming a famous first.

He’ll be the first boy racer – ha – to have his car reduced to scrap in a crusher.

He was charged with driving while disqualified and driving a vehicle with a sustained loss of traction on State Highway 1 north of Milton on September 29.

And guess what the judge did…

END_OF_DOCUMENT_TOKEN_TO_BE_REPLACED 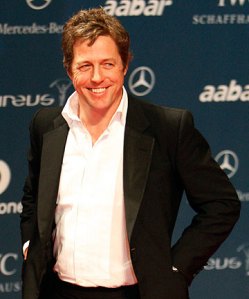 Hugh Grant...he cheered up Alf with his fashion advice.

It’s hard to find good news at Stuff – or anywhere else – this morning.

The poor buggers in Canterbury, already facing a massive cleanup from the quake, could still be hit by floods from rising rivers.

The Stuff reporters tell us emergency services, councils and other agencies were called yesterday to “numerous instances” of felled trees and power lines.

Some of these fallen trees and lines knocked out power and blocked roads, “as high winds hammered the region in the wake of Saturday’s pre-dawn magnitude 7.1 earthquake.”

It could have been worse.

END_OF_DOCUMENT_TOKEN_TO_BE_REPLACED

As a bloke with a few years on the clock, Alf is dismayed that young hooligans are killing off more mature members of our society while fleeing from the police.

Two elderly people were killed in a car crash during a police chase in Christchurch.

Christchurch, of course, is notorious for having raised a generation of lunatics known as boy racers.

The crash that killed the couple happened about 8.10pm in Fitzgerald Avenue, a notorious street for boy-racers and part of the city’s new anti-cruising zone.
END_OF_DOCUMENT_TOKEN_TO_BE_REPLACED

Driving in bumper-to-bumper traffic? If so, how did the car finish up where it did?

Some sprogs can do no wrong in the eyes of their adoring parents.

Alf accordingly is not surprised to learn that good old mum is defending the driving of the teenage driver involved in a crash that killed a four-year-old boy.

Charges have been (or are to be) laid against the driver. Thus the courts will sort out what happened and how seriously the boy should be punished.

The background is reported in the HoS this morning, along with the driver’s parents’ defence of their offspring.

Ash Austin, 17, was driving a car that left the road and struck Nayan Samuel Woods, 4, and his brother Jacob, 6, as they walked along Linwood Ave in Christchurch with their mother Emma on Friday evening. Nayan was killed and Jacob was seriously injured.

END_OF_DOCUMENT_TOKEN_TO_BE_REPLACED

Alf has enormous sympathy for the bloke who is saying it’s time to crush drink-drivers’ cars.

The oldest son of a mother-of-five who was killed by a woman fleeing a police check point makes his call for harsher measures in the HoS today.

Bradley Phillips said last night he was frustrated by the Government’s eagerness to crush boy racers’ vehicles, while letting drink-drivers keep theirs.

His mother, Penelope Rae Phillips, 52, died in Blenheim on Friday night after a 20-year-old woman smashed into her car.

The woman had been stopped at a police checkpoint 400m away. Police said she blew a positive result then sped away.

Officers scrambled to pursue, but the woman struck the white Nissan Penelope Phillips was driving. She died at the scene.

Wanna hear a Stand Up comedian? Then listen to James Sleep and laugh at his silly politicking

Alf has just had his attention drawn to some nonsense published in the name of the Youth Union Movement.

The fledgling lefties – who operate under the name Stand Up – are squawking about the Government’s plans to screw a few more bucks out of issuing driver licences.

The New Zealand youth union movement, Stand Up, is calling on the Government to consider young people, especially young workers, before increasing the cost of driver licences.

END_OF_DOCUMENT_TOKEN_TO_BE_REPLACED

Stepping up the war on boy racers 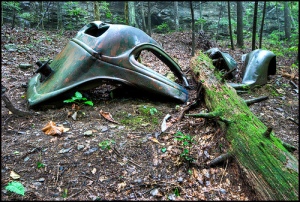 An organic car crusher - or how to win Green Party support for our policies to get rid of boy racers.

Crusher – of course – could say that on 1 December two new street racing laws came into effect.

END_OF_DOCUMENT_TOKEN_TO_BE_REPLACED

A crushing rejoinder to Treasury twaddle

Some tossers in the Treasury have become much too keen to show off their flair for analysis, and have advised the government there’s no proof its proposed new laws to prevent boy-racing will work.

The department’s objections to the law changes which include the crowd-pleasing proposal to crush the cars of repeat offenders are contained in Cabinet papers on the new laws released to The Press under the Official Information Act.
END_OF_DOCUMENT_TOKEN_TO_BE_REPLACED

Putting the squeeze on boy racers

A nice piece in The Press today reinforces Alf’s concerns that boy racers are being treated much too leniently by our justice system. He’s all in favour of having the buggers strapped into their cars, then sending the cars to the crusher.

Boy racers are swapping thousands of dollars of fines for community work, with some receiving generous conversion rates of up to $100 for every hour worked.

END_OF_DOCUMENT_TOKEN_TO_BE_REPLACED

A crushing retort to the woofters

Clayton Cosgrove, Labour’s law and order spokesman, once described himself as “traditional, morally conservative, old-fashioned even.” DPF picked up on the remark at Kiwiblog, shrewdly observing that a self-described moral conservative in the Labour Party “can be about as welcome as a zoophile would be in the Animals First Party” (but Cosgrove would have picked up a lot of votes in my home patch, where folks aren’t too strong on a woolly woofter approach to dealing with criminals).

Perhaps Cosgrove has gone soft, since then. END_OF_DOCUMENT_TOKEN_TO_BE_REPLACED