END_OF_DOCUMENT_TOKEN_TO_BE_REPLACED

Oh, no – British blokes are being put out to pasture as David Cameron opts to put gender before merit 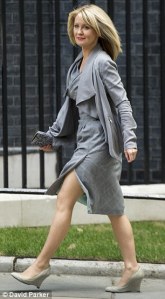 Nice legs … but better brains than each of the blokes booted out of the British Cabinet?

Alf is hoping The Boss is not seized by his Pommie counterpart’s pathetic impulse to kick experienced blokes out of his Cabinet to replace them with a bunch of sheilas.

The hard-working member for Eketahuna North confesses to his concerns being driven by self-interest. He still hankers for a place in the Key Cabinet. If The Boss takes a sudden snitch against mature male MPs…

Well, that would put the kibosh on Alf’s ministerial ambitions, obviously.

He has had the gall to declare his new team reflects modern Britain.

Does this mean blokes in modern Britain should be put out to pasture when they reach a certain age?

It’s heartening to hear Cameron now faces a backlash from some of the Tory old guard who accuse him of culling middle-aged male ministers regardless of their merits.

END_OF_DOCUMENT_TOKEN_TO_BE_REPLACED

Any good reason for Kate to give up all her posts? Well – ahem – new blood would be welcome

Gotta say Kate Wilkinson has come out of the Pike River thing better off than before.

On Monday morning she could boast she was –

By the end of the day she had only three of those portfolios, having resigned as Minister of Labour.

Some unreasonable tossers were demanding she give up all her jobs, but she was having none of it (as you can learn here).

END_OF_DOCUMENT_TOKEN_TO_BE_REPLACED

It’s a great-looking cabinet (notwithstanding its one glaring omission)

Yes, Alf has seen the list of who’s who in the new cabinet.

And yes, he knows the name of the long-serving and much-admired member for Eketahuna North is not there. Crowded out by the need to accommmodate MPs from other parties, no doubt, which makes Alf very hostile towards MMP as well as towards John Banks, Pita Sharples, Tariana Turia and the Tosser from Tawa.

Can a deeply wounded back-bencher demand a recount – or a judicial review or some such?

END_OF_DOCUMENT_TOKEN_TO_BE_REPLACED

The Italians are good at some things.

Making pasta, pizza and gelato, too, and – Mrs Grumble threw these in – making expensive clothes and brands, and gorgeous shoes.

Mind you, they are not so hot on construction. A tower they built in Pisa would not stand up to a building inspector’s demands, here in Eketahuna.

And while we are at it, let’s not get around to adopting their ideas on governance.

END_OF_DOCUMENT_TOKEN_TO_BE_REPLACED

So did Sammy hook or slice to finish up in the rough?

Bugger. The report into former cabinet minister Pansy Wong’s use of her travel perks is bad news for Alf’s ministerial ambitions.

It has raised Pansy’s hopes of returning to Cabinet, and hence has generated a bit more competition for ministerial jobs.

“While it is my hope to return to Cabinet, I understand that it has to be earned, and my energy and focus now will be used to serve the people of Botany and promoting the interests of ethnic communities across our country. I am looking forward to returning to Parliament.”

END_OF_DOCUMENT_TOKEN_TO_BE_REPLACED

Alf was jolted awake this morning by the babblings of a Radio New Zealand news reader.

Tax is back on the Government’s agenda for the start of 2010, with a tax working group due to issue its final report on Wednesday.

Back on the Government’s agenda?

When was it taken off the bloody agenda?

The issue was big deal when the government set up the working party in March last year and – Alf is assured when he raises the matter at caucus meetings – it remains big deal.

END_OF_DOCUMENT_TOKEN_TO_BE_REPLACED

Love to be a fly on the Cabinet room wall tomorrow, when Prime Minister John Key turns up with proposals to reassure parents the child discipline law will be carried out the way it was intended.

But Alf is disappointed to hear from Radio NZ the proposals to Cabinet will not involve changing the current law.

“My view is the law is working as was intended but I think the very strong message that comes through from this referendum is that New Zealand parents don’t want to see themselves or their neighbours or anybody else criminalised for lightly smacking a child.
END_OF_DOCUMENT_TOKEN_TO_BE_REPLACED

Some political mentors are ideal for public appointments. Some – as Paula Bennett is finding out the hard way – are not.

True, Labour squawked about it being a political appointment but The Boss said McLay had a “remarkable skill set” that had been put to use for previous governments no matter what party was in office.

Mr Key has credited Mr McLay as a mentor, seeking him out for advice before entering Parliament in 2002 and continuing to tap into his political knowledge since.

If the media found anything untoward in McLay’s bedroom, and especially in his bed, after the appointment was announced, it has kept remarkably quiet about it.

Not so in the case of Christine Rankin, whose dress sense alone and appalling earrings should have given the cabinet grounds for vetoing her appointment to the Family Commission.

And in recent days – sure enough – the shit has hit the fan as stuff has emerged about her private life.

Alf can tell you The Boss is not too bloody happy with Paula Bennett, who kept quiet about some of the stuff that is grist for the gossip mill.

As The Herald reports today:

It is understood the Government has been shocked by the fallout over her appointment which, instead of dying down, intensified after murky details of her private life became public at the weekend.

The Cabinet’s delay yesterday in finalising the appointment of the Transition Agency to oversee the Auckland Super City is understood to be a consequence of the debacle.

The Government has decided to take more time over its appointments where there may be potential fish-hooks.

More critically for the Minister of Social Development, Paula’s role in strongly promoting Rankin is coming under scrutiny.

Ms Rankin is said to be close to Paula Bennett and has become something of a mentor to her, both during the campaign for her successful election as MP for Waitakere last year and in helping her to adjust as minister for the department Ms Rankin once ran.

Both overcame the struggles of sole parenthood to land high-ranking posts.

Paula Bennett is said to have strongly supported Ms Rankin’s appointment against the opposition of some colleagues thought to have included Justice Minister Simon Power.

Rankin may be ideal for mentoring Paula to operate politically (and successfully) in a Westie environment.

But what’s acceptable stuff to promote and defend among Westies doesn’t necessarily go down well elsewhere, especially not here in Eketahuna (although we will watch with fascination when it’s wrapped up in the format of a soap opera).

Tararua District goes to work on the jobs issue

Here’s an initiative involving the Tararua District Council worthy of support by North Eketahuna folk (and certainly endorsed by their hard-working member).

Businesses and industry in Palmerston North, Tararua, Kapiti, Horowhenua and Wairarapa are being invited to a Regional Employment Summit to get a picture on what is happening in the current economic climate and what is likely to happen in the local economy.

The summit is being hosted by the four Economic Development Agencies, Vision Manawatu, Tararua District Council, Nature Coast Enterprise, Wairarapa Chamber of Commerce and the Ministry of Social Development and will be held at the Palmerston North Convention Centre on Monday 6 April 2009.

The purpose of the summit is to give business owners, industry and stakeholders an up to date picture of the global, national and local situation and the expectations and opportunities for our region.