So why have we (but not iwi) been excluded from a Northland beach? Because of official laxity, it seems

It looks like our indigenous persons can chalk up another triumph in having craven public servants put iwi interests ahead of the wider public’s.

The bureaucrats in this tawdry tale of ineptitude are the tossers at the Overseas Investment Office who are dab hands at rubber-stamping applications for foreigners to buy chunks of the country but not so good at ensuring the conditions are met.

Mind you, they have done our indigenous persons a big favour in this case and will have earned lots of brownie points from their political masters in the Beehive.

Strictly speaking, as a member of the Government, Alf should be applauding them.

He will do so publicly (which may well help our team to keep the Maori Party on side).

END_OF_DOCUMENT_TOKEN_TO_BE_REPLACED

But the experience would be safer with a police station nearby.

A couple of camping stories grabbed Alf’s attention this morning.

First, he notes that campers are expressing outrage that the Department of Conservation is thinking about handing over camping grounds to private companies to run them at a profit.

The second is a beat-up about a couple’s unfortunate experience while camping down south. They obviously had a rough time, being abused by a bunch of nearby campers who – so far as Alf can work out – were having a good time.

Because these nearby campers were roaring pissed, by all accounts, a condition in which Southlanders often find themselves, and because the harrassed couple felt threatened, they should have buggered off much sooner and camped somewhere else.

END_OF_DOCUMENT_TOKEN_TO_BE_REPLACED

This dolphin is decidedly dead, so just put a fire under him and turn Moko into smoko

If Moko has done us a favour, besides being a great attraction for tourists, it has been in bringing a bunch of sad bastards to public attention.

These sad bastards all want a slice of the action when Moko is buried.

Moko the Dolphin will be buried on the island where his body was found, while the town of Whakatane will host a memorial service.

Department of Conservation Tauranga area manager, Andrew Baucke, said yesterday that the animal would be laid to rest on Matakana Island, near Mt Maunganui, where it was found dead last week.

But Kiwis have a desperate urge to create and become obsessed with the activities of celebrities, and this includes animals (such as Shrek the sheep and more recently, ye gods, Paul the bloody psychic octopus).

Some go further and regard certain creatures as sacred.

Simply burying Moko is not enough for these sad bastards. They demand ceremonies, and so…

DoC also announced its decision to hold a memorial service in Whakatane.

A memorial service for what by now is a heap of bones and rotting blubber?

END_OF_DOCUMENT_TOKEN_TO_BE_REPLACED 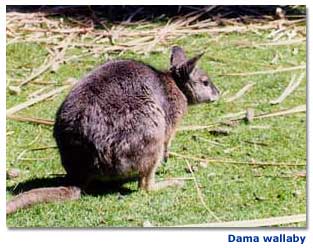 Alf this morning is admiring the enterprise of a Kiwi business that exports wallabies to the United States for sale in pet shops.

We are well rid of the wallabies which are (a) Australian and (b) pests, although some of Alf’s mates reckon that once a creature has been identified as Australian we can take it for granted it is a pest.

Alas, the company doing the exporting has been dragged into an international probe into animal cruelty.

Rotorua-based Dama Exporters was dobbed in to the Ministry of Agriculture and Fisheries (MAF) by People for the Ethical Treatment of Animals (PETA).
END_OF_DOCUMENT_TOKEN_TO_BE_REPLACED

Alf is pleased to bring you this follow-up to his post yesterday about the march of progress into Cathedral Cove.

Despite angering some locals, young entrepreneur Shanan Laird says he has had good feedback from tourists visiting his gazebo at Cathedral Cove.

He’s come under fire from angry locals for buggering up the scenery, but he tells us tourists are relieved to see him at the end of a long, hot walk, and that he is leaving the white-sand beach cleaner than he finds it each day.

Shanan Laird, 31, said he had had nothing but positive feedback from visitors – and only two negative comments from locals – since he began selling drinks and sandwiches at the untouched spot, 30 minutes’ walk from the road.

END_OF_DOCUMENT_TOKEN_TO_BE_REPLACED

Alf is delighted this morning to find humbug alive and thriving in the Coromandel.

It was a gorgeous place, once, until the holiday-makers and property developers moved in and many of the most beautiful beaches quickly were converted into something resembling Auckland suburbia.

Now – the NZ Herald is telling us today – the buggers who live in the houses that have spoiled the Coromandel are complaining about a bloody icecream stall.

The hypocrisy is delicious.

END_OF_DOCUMENT_TOKEN_TO_BE_REPLACED

As things stand, it can afford the luxury of employing staff with nothing much better to do than threaten to prosecute people like Simon O’Donnell, a bloke from Paekakariki, who had what is described as a close encounter with a whale off the Kapiti Coast north of Wellington on Friday.

The southern right whale, which caused traffic chaos on State Highway 1 when it was spotted in the ocean near Paekakariki, inspired local man Simon O’Donnell to paddle out on his surf-ski and get close to it.

“I just had to get on her, it was a once-in-a-lifetime opportunity she was beautiful. I thought I was a whale rider,” Mr O’Donnell told The Dominion Post.
END_OF_DOCUMENT_TOKEN_TO_BE_REPLACED

It makes no sense for government departments to hire lawyers to do battle in court with the lawyers hired by another government agency. The biggest winners in that game are lawyers.

Nor does it make sense for a government department to be arguing the toss in court to frustrate a matter of government policy.

Then we are on to a hot political story which yet another government agency – Radio New Zealand – has flushed into the open.
END_OF_DOCUMENT_TOKEN_TO_BE_REPLACED