So what did I do to be locked up for life?

Alf is delighted to learn that a woman who thought it was a lark to smuggle drugs to mates in jail has been banged up for a while.

He learns from a Stuff report that…

Nikita McCausland, 22, was sentenced in Christchurch District Court to two years imprisonment for supplying methamphetamine, ecstasy, and a class C drug inside a cigarette packet to an inmate at the Christchurch Women’s Prison.

It seems that a strong sense of gender inequality influenced her law-breaking carry-on.

END_OF_DOCUMENT_TOKEN_TO_BE_REPLACED

Sorry, Sharon, but taxpayers would rather not cough up to fly your relatives to Argentina 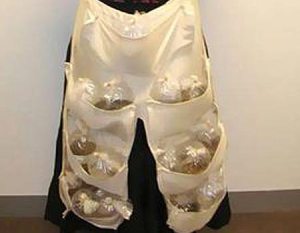 Maybe she would have been more wary if she had been asked to wear this.

Oh dear. The cash-strapped Government – borrowing $250 million a week for each of us to pay back some time – isn’t throwing the stuff around as generously as some people would like.

In particular it won’t come up with the dosh to ensure the “aunty” of an incredibly stupid woman can fly at public expense to Argentina.

Alf, who is a sensitive soul, would not normally belittle people by calling them stupid, let alone incredibly stupid, unless they support the Labour or Green parties.

In this case he makes an exception because he is talking about a self-confessed incredibly stupid person.

She is the 54-year-old former Maori Language Commission deputy chief executive who was arrested on April 13 after Buenos Aires Airport police found (or claim they found) 5kg of cocaine hidden in her suitcase.