Nobody had been stampeding to settle in Invercargill – but did you know shifting there might kill you? 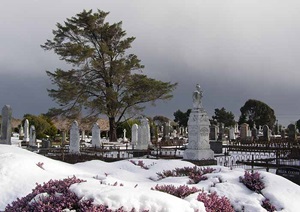 No, not Siberia … it’s Invercargill’s Eastern Cemetery where Stewart Islanders prematurely finish up.

The Grumbles have never contemplated retiring to anywhere but good old Eketahuna.

If they were to move, it would be to somewhere more agreeable than Invercargill, which finished up at the bottom of a very long list the Grumbles prepared last night (it included Baghdad, Damascus and Aleppo).

Their aversion to heading for Inverargill has been fortified by a dismaying revelation about what happens to people who do move there, presumably because of desperation.

END_OF_DOCUMENT_TOKEN_TO_BE_REPLACED

Alf today calls for traffic authorities in cities like Wellington and Auckland to consider employing the traffic-halting attributes of one Cherelle May Dudfield.

Cherelle can bring traffic to a halt, which red traffic lights too often fail to do. Crazed motorists in those cities – and no doubt in other cities, too – simply keep going when the lights turn to orange then red.

That’s where Cherelle – and others like her who might be tempted to become traffic controllers – comes into Alf’s fiendish plan.

Perhaps the Busted Blonde would consider offering her ample services.

Alf envisages Cherelle and the others being strategically located at key intersections to do to big-city motorists what she did to Invercargill ones (although keeping these traffic controllers out of harm’s way for long could be a problem).

Stuff today explains what it’s all about.

An Invercargill woman literally stopped traffic when she flashed her breasts at motorists, causing a car to run into her.

Alas, this resulted in her being brought before Judge David Holderness in the Invercargill District Court charged with disorderly behaviour.

She admitted the charge.

Police prosecutor Sergeant Rob Mills said Dudfield had stood in the middle of the road flashing her breasts at passing motorists on September 27, but the fun went awry when one of the vehicles crashed into her.

Dudfield attempted to run from its path, but rolled over the bonnet, cracking the windscreen, he said. She had not suffered any injuries.

She told police she flashed the drivers after being “egged on” by her friend, Mr Mills said.

Looking on the sunny side down south

Invercargill looks an unlikely winner of the sunniest-city title, and its local newspaper editor seems to be only too aware of that reality.

He does not go further and claim the least-melanoma-risky title for his city.

As for the city with the most sunshine:
END_OF_DOCUMENT_TOKEN_TO_BE_REPLACED

May I nibble a Swede?

Good questions have been raised at Kiwiblog, in the wake of the furore raised after two women were refused service at an Invercargill cafe because they come from Israel.

Would the Turkish Moslem café owner refuse to serve Israeli Arabs, and would he like it if a shop refused to serve Turks until Turkey apologises for the Armenian genocide (or even accept it happened), or END_OF_DOCUMENT_TOKEN_TO_BE_REPLACED