END_OF_DOCUMENT_TOKEN_TO_BE_REPLACED

And if we can’t find a stretch of clean water – too bad.

Alf has been hugely heartened by the opportunity which opened today for him to replace Mike Sabin as chairman of the select committee that deals with law and order matters. It’s a great chance to promote a harder stance on crime and criminals.

Sabin, of course, has been at the centre of reports he is being investigated by police over an alleged assault.

Alf would have thought an alleged assault is easily investigated. He is bothered at having to suppose that, if there has been such an investigation, the matter of who did what to whom has taken a helluva long time to sort out.

Trouble is, Mike became awfully circumspect about the the matter and The Boss’s silence hasn’t helped stem the flow of conjecture and rumour.

END_OF_DOCUMENT_TOKEN_TO_BE_REPLACED

Dear Crusher: If it’s good enough for zoo keepers to shoot to kill escapers, why not prison escapers too? 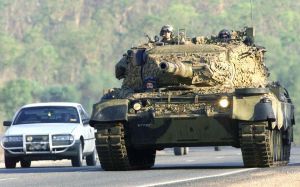 Is this Crusher popping down to the shops?

Mrs Grumble has just typed a letter for Alf to sign and send to the admirable Corrections Minister, Crusher Collins.

Alf was tempted to raise the matter of Crusher’s petrol expenses, but decided that would be counter-productive.

It would be apt to get her back up, and when Crusher gets her back up she can become more than somewhat shrewish.

But more of that later.

Alf’s purpose was to recommend the hiring of Paul Horton for a job in the Corrections Service, to look after our more dangerous prison inmates.

END_OF_DOCUMENT_TOKEN_TO_BE_REPLACED

Please, please Sandra – tell us the professor has got it wrong in dismissing you as a dumb moral pygmy

Alf is a tad bewildered by party colleague Sandra Goudie’s indifference to what he regards as harsh criticism.

She seems remarkably unbothered that a university wallah with some credentials in the law racket is reported to have put the boot into the Law and Order Select Committee, which she chairs.

Otago University’s associate professor Andrew Geddis, the wallah in question, is saying National and Act Party members of the aforementioned committee have no regard for basic individual rights.

So far, so good. Having no regard for basic individual rights will probably go down well with most voters in this country.

But then comes the damaging bit: he also reckons they have come up with a bit of legislation that will give William Bell, Graeme Burton and Clayton Weatherston the vote.

More than that, the select committee’s recommendations to the House – if passed into law – would mean any other murderer, rapist or violent criminal currently serving a sentence of more than three years will get to vote at the next election.

… are not only moral pygmies, but they are really, really dumb.too