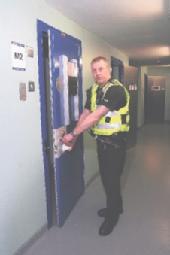 END_OF_DOCUMENT_TOKEN_TO_BE_REPLACED

Alf is thinking this morning on the issue of voluntary euthanasia and whether it should be legal for him to help Mrs Grumble hasten her journey to the hereafter, should she have damned good reasons for wanting to go there but needs his assistance.

No, there’s nothing ailing Mrs Grumble. She is in good health.

This is a matter of musing on the principles of voluntary euthanasia, or assisted suicide, or whatever you care to call it.

An outfit called Triangle Television has banged out a media statement, reminding us that Maryan Street’s Private Member’s Bill – waiting to be balloted – has re-opened the “voluntary euthanasia” debate.

END_OF_DOCUMENT_TOKEN_TO_BE_REPLACED

Our leaders are putting a safety spin on Bin Laden’s demise, but terrorists will be seeking revenge

It looks like the Government has found a way of saving public money – by sharing spin doctors with Labour.

The evidence for this is to be found in reactions to news that Osama Bin Laden had been bumped off by the Yanks and tossed into the ocean.

A press release from the Labour Party, in the names of Phil Goff and Maryan Street, welcomed confirmation from US President Barack Obama that American forces have killed the terrorist Osama bin Laden during a raid in Pakistan.

“Osama bin Laden is the mastermind behind numerous terrorist attacks carried out around the world. He is responsible for the deaths of thousands of innocent people. He founded the jihadist terrorist organisation al-Qaeda and has committed his life to spreading its deadly tentacles across the globe. His death will be a major blow to that organisation and that is something that we should welcome.”

Alf went to the Beehive website to find what The Boss had said on the matter.

END_OF_DOCUMENT_TOKEN_TO_BE_REPLACED

The croneyism crock: McCully rewards his mates because he would be daft to do favours for his foes

So which one of these dots is Niue?

Alf is deeply offended by all this stuff being bandied around about “croneyism”. The word trips too easily off the sharp tongues of our political enemies.

In both cases they are trying to embarrass Murray McCully, for most parts a splendid fellow, although Alf was somewhat disappointed by his failure to scuttle the misspending of $2 million on a plastic waka.

END_OF_DOCUMENT_TOKEN_TO_BE_REPLACED

Must have a word with Murray McCully about the butchers of Burma.

It seems a few of the buggers are being taught English in this country, and Alf’s constituents – all New Zealand taxpayers, actually – are picking up the tab.

More of the Burmese bureaucrats may come here. So what’s up with McCullly?

Does he have some mad plan to turn this country into a Burmese abattoir?

The scandal – and McCully’s namby-pamby attitude to what’s going on – is exposed on Stuff’s web-site today.

END_OF_DOCUMENT_TOKEN_TO_BE_REPLACED

Keep an eye out for the next batch of Government appointments to important jobs. Or to the not-so-important ones, come to think of it.

So long as a minister does the appointing and a few bucks are dished out to the appointees for their work, Alf is interested.

He has been quietly promoting the name of Mrs Grumble among his mates in the Cabinet, urging them to give her a go on one of the boards whose memberships they control.

Sure, you can call it nepotism or jobs for the boys (and gals). But hey – what’s the point of being an MP if you can’t push your missus’s barrow and try to land a bit of extra dosh for the family.
END_OF_DOCUMENT_TOKEN_TO_BE_REPLACED

ASEAN and a lesson (for Dicks) in generosity

Alf is sure he heard the feds president, Don Nicolson, welcoming the deal on a Radio New Zealand news item at noon today – enthusing about it, even.

But a journo mate tells Alf the feds recalled a press statement on the issue last night, and there is no sign of a replacement. The most recent item on their web-site is a response to Jeanette Fitzsimons’ announcement she will be stepping down as co-leader of the Greens.

It also reiterated the feds” intransigence on climate change –
END_OF_DOCUMENT_TOKEN_TO_BE_REPLACED

In case you missed it, today – it seems – was Pink Shirt Day and a gaggle of Labour MPs was suitably attired to mark the occasion (which has even less going for it than Children’s Day).

They issued a statement today to declare –

The members of Labour’s Rainbow Caucus MP are today donning appropriately coloured shirts in support of the country’s first ever Pink Shirt Day, designed to highlight the need to prevent bullying in schools.