Some mad bastards are running freely around the country after threatening to poison infant formula. But the  news media have been just as enthralled by the antics of some tossers with a powerful urge to protect  trees.

Alf is not sure what has happened today but overnight – as you can see here – the owners of the Titirangi sites where a kauri and a rimu were scheduled for removal have released an open letter saying the kauri  can stay.

This sounds like discrimination against rimu, but Alf – to be candid – couldn’t care less.

Accordingly he thinks Environment Minister Nick Smith is looking dangerously like a greenie for saying he hoped the kauri would be saved.

“I expressed to the [Auckland] mayor [Len Brown] a preference for the 200-year-old kauri to be spared, if at all possible, but that the Government respected the fact that it was a decision for the Auckland Council.”

This fuss led Alf to recall the appalling way an elderly couple in Kapiti were treated last year for doing the environment a favour and letting in more sun by lopping a few trees.

The bloody council fairly obviously knew it was being unreasonably bloody-minded by sending in the cops to help deal to the couple because it apologised while persisting with prosecuting them.

END_OF_DOCUMENT_TOKEN_TO_BE_REPLACED 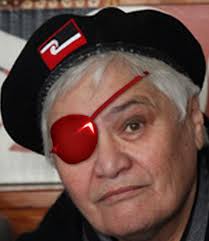 END_OF_DOCUMENT_TOKEN_TO_BE_REPLACED

Murray McCully’s meddling at MFAT – might it bring about his ministerial demise?

It looks like your hard-working MP will have to wait to see if his formidable talents are appropriately recognised by The Boss with a long-overdue promotion.

That howz-yer-father about the ACC and the Pullar woman culminated in Nick Smith’s resignation from his ministerial portfolios.

Great (although Alf is not publicly displaying his approval).

Trouble is, Nick’s ministerial jobs have been given to others, at least for now.

END_OF_DOCUMENT_TOKEN_TO_BE_REPLACED 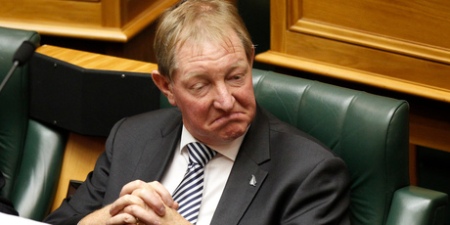 "What else should I be saying sorry for?"

Just quietly, Alf has been struggling to suppress his urge to join the Labour tossers in demanding Nick Smith’s head.

They reckon he is not fit to lead the Government’s local government reforms and must be sacked.

This follows Nick doing something Alf would never do: he apologised.

The advice never to apologise was drummed into Alf by his dad.

Nick, obviously, was not blessed with such sound parental guidance.

END_OF_DOCUMENT_TOKEN_TO_BE_REPLACED

So who said size is cods?

Nobody puts it as baldly as that.

But that’s what drove the formation of Fonterra. It also drove the merging of four existing government agencies to create the new Business, Innovation and Employment Ministry.

This made Steven Joyce a genuine Pooh-bah, our Lord High Everything.

Some people wail about lots of civil servants being made redundant or something, which will swell the dole queues.

To the contrary, this will free them to wait patiently for proper jobs in the private sector, because – as we all know – governments don’t create jobs, private enterprise does.

END_OF_DOCUMENT_TOKEN_TO_BE_REPLACED

Wow...it's not as warm up here as I was predicting.

The Greens are grouching again about climate change and all that carry-on at the same time as scientists are affirming that we are no good at forecasting anything to with the future.

Because forecasters only forecast something they reckon will happen in the future, this means we haven’t progressed much from the days when a pile of chicken guts would be consulted before decisions were made.

They’ve got the right idea in Romania where they have been considering legislation to keep witches from misleading the people.

A month after Romanian authorities began taxing them for their trade, the country’s soothsayers and fortune tellers are cursing a new bill that threatens fines or even prison if their predictions don’t come true.

The witches kicked up a fuss about this, saying they shouldn’t be blamed for the failure of their tools.

END_OF_DOCUMENT_TOKEN_TO_BE_REPLACED

It would be comforting to say there will be no quake in Christchurch today, but Alf is not a prophet

The white beard tells us a lot.

A huckster once read some tarot cards and predicted Alf would become Elizabeth Taylor’s umpteenth husband. This was a very grim prediction, because Elizabeth Taylor by then was well past her best-by date.

Joy, oh joy, it never happened, although this may be a consequence of Alf giving Elizabeth Taylor a very wide berth – just in case – and of Mrs Grumble making damned sure Alf gave the fading star a wide berth.

None of the huckster’s other predictions came to anything either, Alf established by checking among those whose futures similarly had been foretold at the time.

This experience prompted Alf to look real hard into the predicting and prophesying business, from horoscopes and tealeaf readings to economic forecasters.

END_OF_DOCUMENT_TOKEN_TO_BE_REPLACED

Yes, Nick Smith is taking a punt with climate change – but so did Rodney with the Super City

A sartorial turn-off - and he's blinkered about Auckland, too.

Those tossers at ACT have a bloody nerve.

Mind you, lots of nerve is needed when membership requires you to be led by a bloke who wears yellow jackets.

In this case, however, Alf is talking about the nerve of John Boscowen, who basks in the title of ACT Deputy Leader and Climate Change Spokesman.

He has got all huffy about climate change matters, and is demanding to know

… how Climate Change Minister Dr Nick Smith could propose to reduce New Zealand greenhouse gas emissions to 50 percent below 1990 levels by 2050 when he does not even know what effect this target will have on jobs and GDP.

The answer is simple.

You take a bloody big punt, you stand up and you propose it.

And if you don’t know what will happen as a consequence – well, that’s just too bad.

END_OF_DOCUMENT_TOKEN_TO_BE_REPLACED

Encountering Nick in the nick (well, almost) would be unedifying but shouldn’t induce trauma

Another layer of business suit would lift his image.

But Mrs Grumble would welcome this bloke to Eketahuna.

Dunno what the bloody fuss is about.

It transpires that Nick Smith has been spotted wandering through the Wellington suburb of Thorndon in his bathing trunks – our Nick in the near nick, you could say.

The thought of it is somewhat challenging for Mrs Grumble.

So far as she is concerned, someone like Daniel Craig could walk all the way from Thorndon to Eketahuna in his trunks, and she would make no fuss – at least, not of the complaining sort.

To the contrary, she would hope the whole trek was broadcast live on the telly.

And when he got to Eketahuna, she would be out there to personally welcome him to town.

But Mrs Grumble is grateful Nick Smith’s jaunt was not photographed, and that pictures of Smith in his togs were not posted on the web or on the front page of the Dom-Post, because she would rather not know what the bugger looks like without the protection of a business suit. Preferably two business suits.