If the iwi protesters don’t want oil, what will they be using to power their boats? 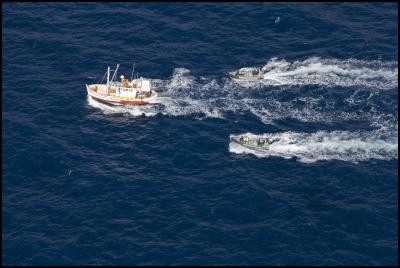 Tell the paddlers we need more speed...the cops are catching up.

Hurrah for the cops who have arrested the tosser who was skippering a protest boat called the San Pietro during oil survey protests.

Charges have been laid. Good.

Elvis Teddy, the captain of San Pietro, was arrested for breaching the Maritime Transport Act after police boarded his boat yesterday morning amid protests against Brazilian company Petrobras’s search for oil.

Mr Teddy was charged with operating a vessel in unsafe manner under section 65 of the Maritime Transport Act, a police spokesman told NZPA today.

He was released on bail last night to appear in court in Tauranga on Friday.

Police are reviewing evidence and may lay further charges.

Just 12 months in the slammer? Alf must have dropped off when that bit of the legislation was being debated, because it would have been his strong inclination to argue the toss in favour of making this a hanging offence.