Alf has a soft spot for the good folk at Federated Farmers, especially because they always send him an invitation to their pre-Christmas party in Wellington which he enjoys attending.

But he is not entirely sympathetic to their complaint that WorkSafe New Zealand is out of control for pursuing charges against a farming couple for failing to wear helmets on their quad bike.

An account of what happened can be found here at Stuff.

Marlborough farming couple has been fined $40,000 for not wearing helmets while riding their quad bikes.

Phillip Andrew Jones, 33, and Maria Anna Carlson, 30, were spotted by WorkSafe New Zealand inspectors riding a quad bike without helmets on a Havelock farm on multiple occasions since 2012.

The pair were absent from the Blenheim District Court when they were sentenced by Judge Tony Zohrab yesterday.

The court heard the pair, who have a share-milking partnership on the farm, were given multiple warnings by WorkSafe to wear helmets while on their quad bikes, but continued to be non-compliant.

So what does “multiple warnings” mean?

END_OF_DOCUMENT_TOKEN_TO_BE_REPLACED

If it’s a good idea for more people to be obliged to belt up, let’s start with coroners 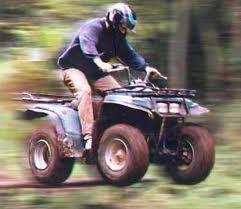 Belting up would be an impediment.

Alf is fast coming to the conclusion that coroners should make findings about how people died in the cases referred to them – full stop.

But please spare us the recommendations.

Authorities elsewhere can study a coroner’s report and draw their own conclusions about what lessons are to be learned from a sudden death.

But coroners – it seems – are attention-seekers.

They like to pepper their reports with advice and recommendations on how deaths could be avoided, and to give officials somewhere a kick up the arse for not having done this.

It’s sure to attract the attention of the media and their headline writers.

But some of that advice looks downright dodgy to Alf.

END_OF_DOCUMENT_TOKEN_TO_BE_REPLACED

If making quad bikes safer is the smart thing to do, then don’t expect MPs to get it done

Some people seem to think passing a new law will take care of just about anything, including the prevention of death and maybe baldness, too.

Take the case of the Wellington coroner, a bloke called Ian Smith, who is reported to have denounced Parliament for failing to bolster laws to make quad bikes safer.

He reckons such changes could have saved the life of a young beekeeper.