On yer bike? No, that’s to be hostile to motorists – it’s better to go walking instead 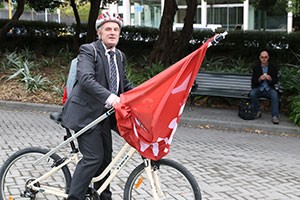 Here’s a good reason for sticking to the motor car.

Alf thinks the merits of the motor car are easily demonstrated.

First, greenies  are fond of bicycling and disparaging of vehicles that emit greenhouse gases without explaining the miracle by which cyclists don’t emit such gases.

Second, he has seen Trevor Mallard on a bike and it is not a pretty sight.

Accordingly Alf has no urge to sympathise with  Alex Mann, the bloke whose champions say made a legitimate choice when he decided to travel by bicycle on the day a police officer fined him for impeding traffic.

As one of his defenders has argued:

He obeyed the road code by keeping left but not so far he was in danger of falling in the drain or becoming unstable in the grit and debris often present on road edges.

He was aware that there was at least one vehicle behind him and believes he rode in a fashion that most of us would recognise as a signal that the vehicle should pass. Unfortunately these signals were not acted upon by the following vehicle either because they were taking photos or they were from a different culture and did not recognise the signals.

Most motorists will have done this at some time in their life, going a bit slow for some reason and moving to the left but the vehicle behind does not pass.

When the vehicle did finally pass the ticketing policeman was on his motor cycle in the queue.

The resulting ticket seems excessive. This situation arises often with tractors, mowers and even those pulling trailers that are limited to 90kmh on the open road often causing traffic to slow down.

He goes on to say this has been shown to have huge benefits for society, motorists and the cyclists.

Alf remains unconvinced about these benefits.

He also disagrees that…

It is unfortunate that Mr Mann was ticketed for behaving properly and even more unfortunate that the judiciary upheld his conviction. These institutions do not produce perfect outcomes but thankfully we have a society that respects the outcomes and lets us voice our disappointment from time to time.

The defender, for the record, is Don Babe, who is the chairman of a commuter cycling lobby group called Spokes Canterbury.

A spokesman, you could say

Fairfax motoring editor Dave Moore has presented the other side of the story, arguing that cyclists are regular hazards.

In my 40,000km of driving every year, cyclists are regular hazards.

Every weekend, I come across a dozen or so cycling enthusiasts who will group together and force drivers to follow them at 25-30kmh on roads signed at 70kmh to 100kmh.

I remain patient and stay behind them until there are no vehicles coming the other way, as there has never in all these year been a suggestion that they’ll move into single file.

As I overtake, I have to remember not to offend by racing the engine or creating more noise than is necessary, because otherwise it’s fingers out and shouted rudeness.

But Alf’s thinking is better expressed by a writer in The Spectator who is worried that too few cyclists are being killed on British roads each year.

While the number of cycling journeys undertaken in the UK has risen enormously since 2006, and exponentially since the exciting, hirsute Sir Bradley Wiggins won a bicycle race in France in 2012, the official statistics show only a moderate rise in fatalities. This suggests to me that car drivers have become more accommodating in their behaviour towards these people and have lost their radical anti-cycling zeal. They have been bullied out of it, one suspects, by official propaganda that insists that knocking cyclists over, deliberately or otherwise, is somehow ‘antisocial’…

Yes, the author admits to jesting and being in bad taste.

And you were probably aware that I was joking, unless you are a committed cyclist who is determined to be outraged.

Check out the cycling websites and you will learn that they ride two abreast precisely to stop cars overtaking them, because on narrow roads they are convinced that car drivers will cut in too close to them as they pass. So they block the entire road and feel good about it, because they are Victims. The law states that they are allowed to ride two abreast on a big, wide, straight road, no bends and curves, where there is plenty of opportunity and width for cars to pass by in comfort; but a hefty majority of the posts I saw on several websites revealed very different strategies. Their view is that unless a car has room to pass two cyclists, it shouldn’t be trying to pass one. And with that they wrap themselves in self-righteousness as the queues of traffic tail back further and further.

Likewise, riding on the pavements and thus maiming pensioners. The law is clear about this, for a change. They should never do it. But they do it because they feel safer there, of course. Listen, you plastic-hatted ninny: if you don’t have the balls to cycle in the road, then ditch the bike. It is still the case that, mile for mile, pedestrians are far more ‘vulnerable’ than cyclists. Mile for mile, more pedestrians are killed. They — we — are the real victims, even if we do not whine about it continuously. And the number of pedestrians maimed by cyclists is also rising by the year, to the extent that legislation has been proposed to ensure that cyclists respect the laws of the land the same as everyone else.

He concludes that  legislation is needed to to sort them out, to penalise adult cyclists who ride on pavements, to book them for dangerous driving when they’re cutting lights or riding two abreast on unsuitable roads.

And it should be compulsory for cyclists to use cycle lanes or for local authorities to stop providing them (and turn the existing ones back into normal roads).

Then (he concludes) “the cyclists will feel an even greater sense of victimhood, and thus be happier”.

This entry was posted on Thursday, June 18th, 2015 at 7:31 pm and is filed under Transport. You can follow any responses to this entry through the RSS 2.0 feed. You can leave a response, or trackback from your own site.