Some stuff is best read for laughs, including advice to take the Internet Party seriously 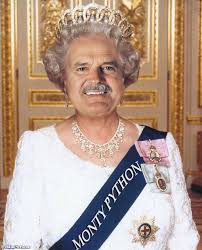 Sadly, he is not on the Mana Internet list.

Alf enjoys humour so was immediately tempted to look for the laughs that were bound to be extracted from a Herald item under the headline:

This lack of an appreciation for powerful and well-considered rhetoric means Alf reads Armstrong only for the chuckles.

END_OF_DOCUMENT_TOKEN_TO_BE_REPLACED

If you want to see a cover-up, leave Crusher alone and check out the dress code in Qatar

The Grumbles have never been great enthusiasts for soccer, or any sport where the players are apt to kiss and hug each other and otherwise display unseemly behaviour.

The won’t, therefore, be travelling to Qatar for the 2022 World Cup, some eight years hence.

Among other things, Alf by then will be … well, let’s say of mature years in the age department.

In some respects this is a shame because it means the Grumbles won’t enjoy the spectacle of soccer fans – a boozy, brawling bunch of hooligans, by all accounts – getting to grips with the dress and behaviour code of Qatar.

END_OF_DOCUMENT_TOKEN_TO_BE_REPLACED

A marriage of mana and money makes a moaning minnie of – guess who? Yep – Sue

And so the decision has been made.

The Internet Party and Mana Party have teamed up for this year’s election.

Alf and his fellow Nats are feeling seriously unthreatened.

Hone Harawira will be top dog in this odd coupling – he will have top billing on the alliance’s party list.

Mana has given up the number two spot on their combined list to the Internet Party’s leader, who will be named tomorrow (or so we are assured).

This is all too much for dear old Sue Bradford to stomach. She has spat the dummy – as she warned she would – and quit the Mana Party.

END_OF_DOCUMENT_TOKEN_TO_BE_REPLACED

This Kiwi sheila is faster than a speeding bullet … but could a lump of kryptonite slow her down?

A Dom-Post report on a shooting spree in California gives an account from a woman from Hawke’s Bay.

The front-page story says she ran for her life during the spree that left six people dead in her neighbourhood in Isla Vista, Santa Barbara.

The headline atop this report says –

According to Yahoo answers the speed of a bullet depends on the calibre, the amount and type of powder, and the bullet weight.

To flee a bullet, accordingly, the Kiwi woman must be able to run really fast.

Our athletics officials should take note.

Her name is Amelia Lyons.

What we are not told is the distance she ran while fleeing the bullets.

Our changing population mix is bothering the tangata whenua – will the Asians want special funding too?

Alf is bound to sit up and take notice, when warnings are sounded about the future of special arrangements for our indigenous people.

He is apt to think there should be no special arrangements for anyone – not based on race, anyway – but the horse bolted on that one years ago.

Vast sums of money are dished out from the public purse each year for Maori purposes and increasingly special seats are provided around council tables and in other public bodies for Maori appointees.

Never mind. It’s all in the name of the Treaty partnership, and we shouldn’t question these arrangements – not too shrilly, anyway – lest the indigenous portion of our citizenship get the idea we disapprove of giving them a helping hand.

We get a whiff of the problem that is looming (if it hasn’t already arrived”) from an Asia NZ Foundation survey.

It shows Maori views on Asian immigration have deteriorated in the past year. While most New Zealanders increasingly saw the benefit of Asian immigrants, 44 per cent of Maori believed New Zealanders were more negative towards people from Asia compared with a year ago.

END_OF_DOCUMENT_TOKEN_TO_BE_REPLACED

There’s more than one way to kill a cat – and bad buggers, too – as US prisons run short of lethal drugs

Alf is partial to a good fry-up.

The good people of Tennessee like one too. They are planning on bringing back the electric chair to replace lethal injections.

Tennessee has 74 prisoners on death row. The authorities could run up a fair-sized power bill by the time they get through that lot

Wyoming and Utah are considering the return of firing squads.

The Supreme Court has upheld the legality of the firing squad in 1879, the electric chair in 1890 and lethal injection in 2008.

Wonder if anyone is thinking about the guillotine, the gallows, burning at the stake or – a bit bloodier but once deemed appropriate for bad buggers in England who had committed high treason- hanging, drawing and quartering. 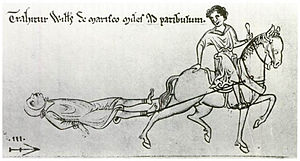 William de Marisco is drawn to his execution.

Convicts were fastened to a hurdle, or wooden panel, and drawn by horse to the place of execution, where they were hanged (almost to the point of death), emasculated, disembowelled, beheaded and quartered (chopped into four pieces). Their remains were often displayed in prominent places across the country, such as London Bridge. For reasons of public decency, women convicted of high treason were instead burned at the stake.

END_OF_DOCUMENT_TOKEN_TO_BE_REPLACED

The headline on a bit of something Alf was reading today says The biggest issue: politics are divided between a weak majority and powerful minority

The article (here) deals with shabby events in Thailand where an elected government has been thrown out by a military coup.

Alf is particularly interested in observing that Thailand’s system is described as quasi-democratic.

This is what comes of giving power and authority to appointed people who can’t be bothered standing for election.

END_OF_DOCUMENT_TOKEN_TO_BE_REPLACED

What happens when public funds are earmarked for special people? Councils are pressed to spend it all

It might be thought that not spending ratepayers’ money would be welcomed as a good thing and there would be much rejoicing.

Auckland Council accordingly should be applauded for having managed to save much of the budget earmarked for certain purposes.

Nah. Not when one of those special purposes is positive discrimination (the PC way of talking about giving an ethnic group funding privileges).

Radio NZ says the council has managed to spend only a fraction of the budget earmarked for Maori initiatives. according to the board representing Maori in Auckland.

The board is one of those unelected outfits that now adorn our local government structures and governance arrangements.

END_OF_DOCUMENT_TOKEN_TO_BE_REPLACED

When the Greens let their hair down, you could say they risk causing serious dis-tress

A very unattractive picture was painted, in Alf’s ever-lively mind, when he learned of the Greens wanting to let their hair down.

Crystal Gayle with her hair down? Well, just take a look at the pic on the right. Alf would have gone a long way to see her and her tresses in her hey-day as a country and western singer.

According to the German fairy tale, Rapunzel was something of a looker with long tresses too.

But Alf would rather be far away when the likes of Metiria Turei (the sheila at the top) let their hair down.

Hence he does not get too excited by news that the Green Party will be holding an auction behind closed doors to raise funds later this month.